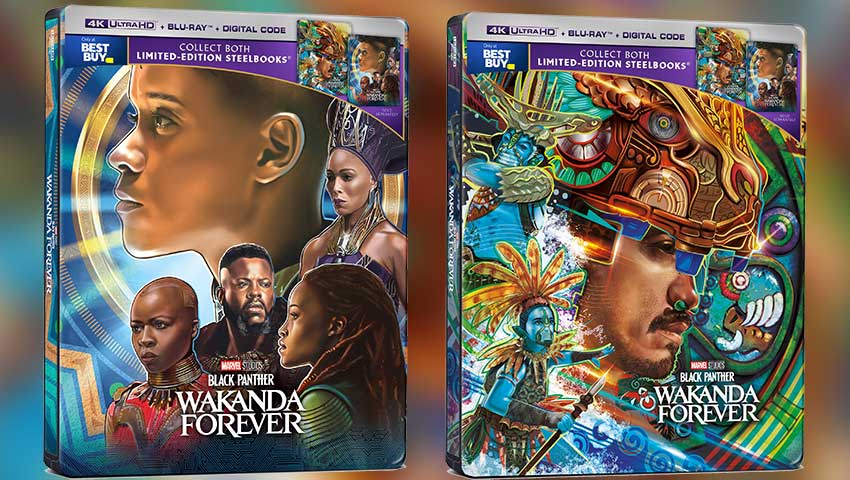 The exclusive bonus content includes the usual deleted scenes, a gag reel and audio commentary by esteemed filmmakers Ryan Coogler, Joe Robert Cole and Autumn Durald Arkapaw. The BLACK PANTHER sequel will also stream on Disney+ on February 1. Plus, a two-movie bundle will be available on all major digital platforms. See the full list of bonus features below.

Additionally, collectors can find two limited-edition SteelBook® designs only at Best Buy. Artist Dorothea Taylor designed one SteelBook that highlights the Wakanda warriors and Orlando Arocena recreated the vibrant world of Talokan for the other.

Below is a list of extras on the BLACK PANTHER: WAKANDA FOREVER digital release.

Gag Reel
• Take a look at some of the lighthearted moments on the set of Black Panther: Wakanda Forever.
Audio Commentary
• Listen to Ryan Coogler, Joe Robert Cole, and Autumn Durald Arkapaw discuss the film.
Featurettes
•Envisioning Two Worlds – Uncover the making of Black Panther: Wakanda Forever through the lens and leadership of co-writer/director Ryan Coogler, production designer Hannah Beachler, and costume designer Ruth Carter.
•Passing the Mantle – Follow the evolution of the Black Panther through the films. In tracing Shuri, Ramonda, and Riri’s journeys through the film, this featurette explores what legacy ultimately means in Wakanda and how it will resonate with MCU viewers for years to come.
Deleted Scenes
•Outside The Scope – Okoye has a shocking standoff with Ayo and the Dora Milaje. Aneka makes a challenging decision.
•The Upstairs Toilet – Ross infiltrates the NSA in disguise in an attempt to uncover information.
•Daughter of the Border – After a conversation with her Uncle, Okoye is faced with a daunting choice.
•Anytime, Anywhere – In Haiti, Shuri and Okoye share a bittersweet moment.
*Bonus features vary by product and retailer

Film Synopsis
Queen Ramonda (Angela Bassett), Shuri (Letitia Wright), M’Baku (Winston Duke), Okoye (Danai Gurira) and the mighty Dora Milaje (including Florence Kasumba), fight to protect their nation from intervening world powers in the wake of the death of their beloved King T’Challa. As the Wakandans strive to embrace their next chapter, the heroes must band together with the help of War Dog Nakia (Lupita Nyong’o) and Everett K. Ross (Martin Freeman) if they are to forge a new path for the kingdom of Wakanda. Marvel Studios’ Black Panther: Wakanda Forever was written by Ryan Coogler & Joe Robert Cole and directed by Ryan Coogler.