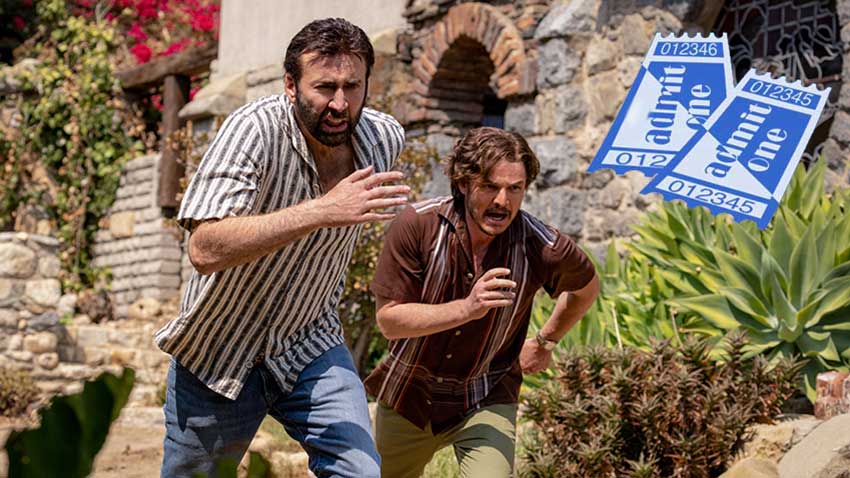 Nicolas Cage stars as... Nick Cage in the action-comedy THE UNBEARABLE WEIGHT OF MASSIVE TALENT with Pedro Pascal. See it before it arrives in movie theaters courtesy of CineMovie and Lionsgate in Los Angeles, Phoenix, Chicago, NYC, Houston, San Antonio and Miami. Read on to enter below.

Creatively unfulfilled and facing financial ruin, the fictionalized version of Cage must accept a $1 million offer to attend the birthday of a dangerous superfan (Pedro Pascal). Things take a wildly unexpected turn when Cage is recruited by a CIA operative (Tiffany Haddish) and forced to live up to his own legend, channeling his most iconic and beloved on-screen characters in order to save himself and his loved ones. With a career built for this very moment, the seminal award-winning actor must take on the role of a lifetime: Nick Cage.

THE UNBEARABLE WEIGHT OF MASSIVE TALENT Giveaway (“Sweepstakes”) begins on or about April 15, 2022 at 6:00 p.m. Eastern Time ("ET") and ends on April 19, 2022 at 11:59 p.m. ET (the “Sweepstakes Period”).  At the end of the Sweepstakes Period, a random drawing will be conducted to select winners from among all eligible entries received, as more fully set forth in the OFFICIAL RULES.  Entry in the Sweepstakes does not constitute entry into any other promotion, contest or sweepstakes.  By participating in the Sweepstakes, each entrant unconditionally accepts and agrees to comply with and abide by these Official Rules and the decisions of CineMovie TV  (“Sponsor”), which shall be final and binding in all respects.