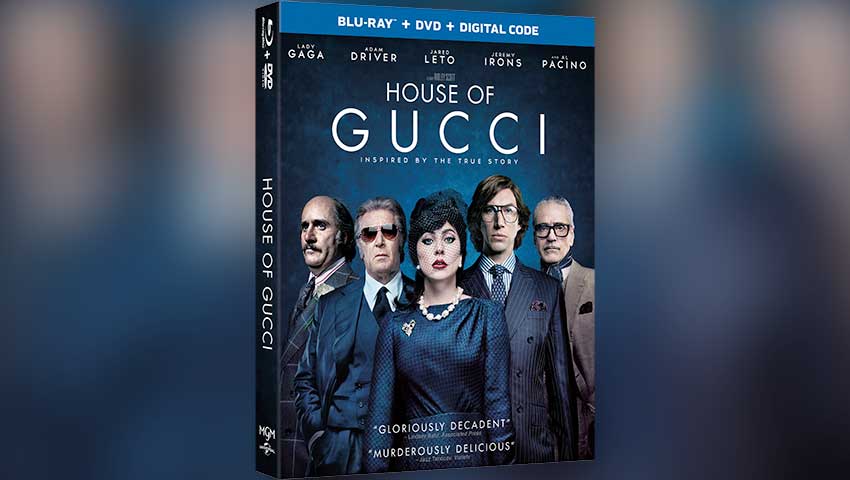 Ridley Scott's HOUSE OF GUCCI is now available on Blu-ray™, DVD and On Demand from Universal Pictures Home Entertainment, and to celebrate the new release, CineMovie has a Bl-uray Combo pack to giveaway. Enter below for your chance at winning.

HOUSE OF GUCCI is inspired by the shocking true story of the family behind the Italian fashion empire. When Patrizia Reggiani (Lady Gaga), an outsider from humble beginnings, marries into the Gucci family, her unbridled ambition begins to unravel the family legacy and triggers a reckless spiral of betrayal, decadence, revenge, and ultimately… murder.

Based on The New York Times best-selling novel, The House of Gucci: A Sensational Story of Murder, Madness, Glamour, and Greed by Sara Gay Forden, HOUSE OF GUCCI on Blu-ray™, DVD and Digital comes with all-new exclusive bonus content including behind-the-scenes featurettes about Lady Gaga’s magnificent transformation into Patrizia Reggiani, director Ridley Scott’s brilliant vision, the creation of the luxurious wardrobes and extravagant sets, and more taking audiences deeper into the fascinating untold story behind the world-renowned fashion brand and crumbling family empire.

ETERNALS Giveaway (“Sweepstakes”) begins on or about February 21, 2022 at 6:00 p.m. Eastern Time ("ET") and ends on March 1, 2022 at 11:59 p.m. ET (the “Sweepstakes Period”).  At the end of the Sweepstakes Period, a random drawing will be conducted to select winners from among all eligible entries received, as more fully set forth in the OFFICIAL RULES.  Entry in the Sweepstakes does not constitute entry into any other promotion, contest or sweepstakes.  By participating in the Sweepstakes, each entrant unconditionally accepts and agrees to comply with and abide by these Official Rules and the decisions of CineMovie TV, 2700 Arlington Ave. Ste. 101 Torrance, CA  90501 (“Sponsor”), which shall be final and binding in all respects.