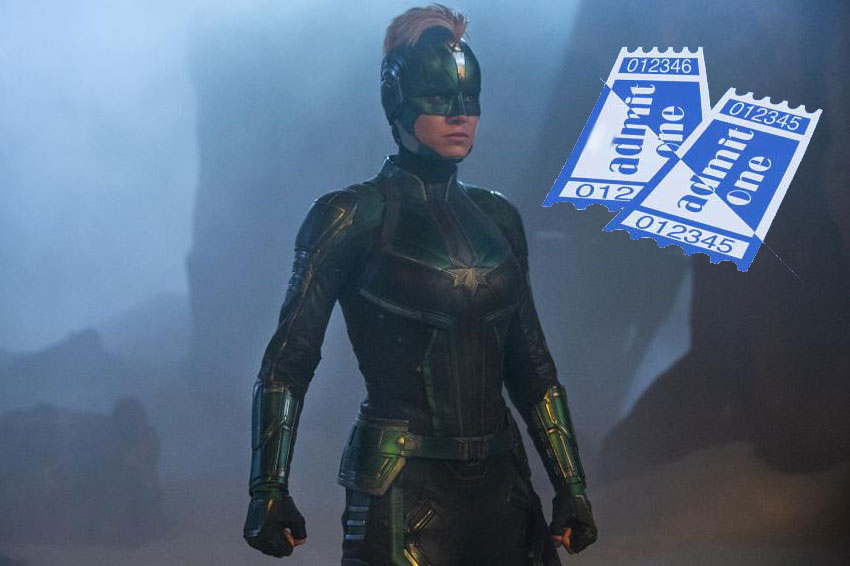 CAPTAIN MARVEL hits movie theaters March 8, but CineMovie has an advance movie screening of the Marvel movie in Los Angeles on Tuesday, March 5th. Read on to enter.

Set in the 1990s, Marvel Studios’ CAPTAIN MARVEL is an all-new adventure from a previously unseen period in the history of the Marvel Cinematic Universe that follows the journey of Carol Danvers as she becomes one of the universe’s most powerful heroes. While a galactic war between two alien races reaches Earth, Danvers finds herself and a small cadre of allies at the center of the maelstrom.

To enter CAPTAIN MARVEL Ticket Giveaway, click on the form below.

PROMOTION DESCRIPTION: CAPTAIN MARVEL Ticket Giveaway (“Sweepstakes”) begins on or about February 27 at 6:00 p.m. Eastern Time ("ET") and ends on March 4 at 11:59 p.m. ET (the “Sweepstakes Period”) or as long as tickets last.  At the end of the Sweepstakes Period, a random drawing will be conducted to select winners from among all eligible entries received, as more fully set forth in the OFFICIAL RULES.  Entry in the Sweepstakes does not constitute entry into any other promotion, contest or sweepstakes.  By participating in the Sweepstakes, each entrant unconditionally accepts and agrees to comply with and abide by these Official Rules and the decisions of CineMovie TV, 2700 Arlington Ave. Ste. 101 Torrance, CA  90501 (“Sponsor”), which shall be final and binding in all respects.