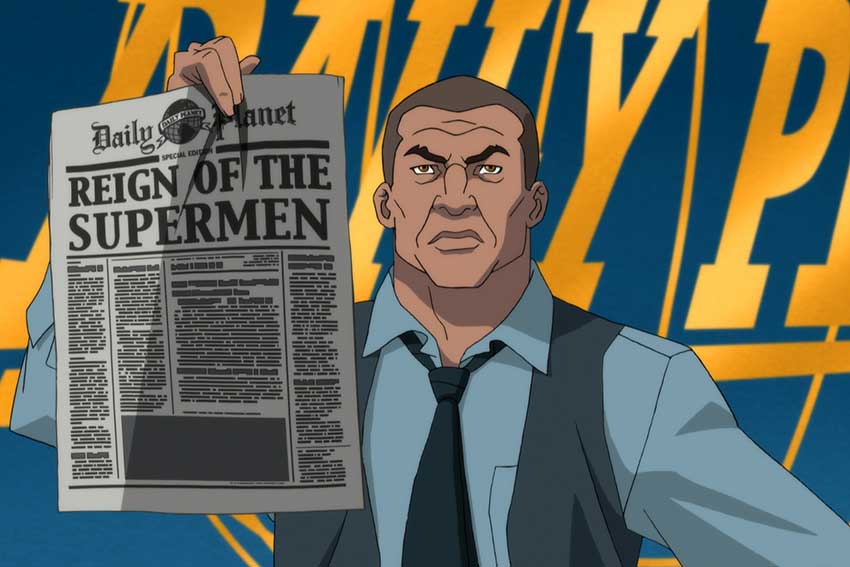 The Man of Steel’s 80th Anniversary is being celebrated with a big screen double feature of THE DEATH OF SUPERMAN and the theatrical premiere of all-new animated Superman adventure REIGN OF SUPERMEN in a special event January 13 and 14. Read on to find out how to get tickets to the Fathom Event.

REIGN OF THE SUPERMEN and THE DEATH OF SUPERMAN will play in more than 500 theaters across the country on Sunday, January 13, and Monday, January 14, only. Tickets are available now at www.FathomEvents.com and at participating theater box offices.

Superman’s greatest adventure – his death and rebirth – will be unveiled in a special two-day exclusive theatrical event as Warner Bros. and DC join forces with Fathom Events for a double feature presentation of the previously released The Death of Superman and the first in-theater screening of the all-new Reign of the Supermen nationwide on January 13 and 14, 2019.

As the second half of the double feature, REIGN OF THE SUPERMEN will be seen nationally in theaters ahead of its Warner Bros. Home Entertainment release on Digital starting January 15, 2019, and on Ultra HD™ Blu-ray Combo Pack and Blu-ray™ Combo Pack on January 29, 2019.

The Man of Steel meets his ultimate match when the monstrous, unstoppable creature Doomsday comes to Earth – hell bent on destroying everything and everyone in his path, including the Justice League – in the action-packed The Death of Superman. In the second half of this two-part landmark tale, Reign of the Supermen finds Earth’s citizens – and the Man of Steel’s heroic contemporaries – dealing with a world without Superman. But the aftermath of Superman’s death, and the subsequent disappearance of his body, leads to a new mystery – is Superman still alive? The question is further complicated when four new super-powered individuals – Steel, Cyborg Superman, Superboy and the Eradicator – emerge to claim themselves as the ultimate hero. In the end, will any of them prove to be the real Man of Steel?

Fathom Events, Warner Bros. and DC present The Death of Superman/ Reign of the Supermen Double Feature in more than 500 select movie theaters on Sunday, January 13 at 12:55 p.m. and Monday, January 14 at 8:00 p.m. (all local times), through Fathom’s Digital Broadcast Network (DBN) . For a complete list of theater locations, visit the Fathom Events website (theaters and participants are subject to change).

“Superman is one of the most iconic Super Heroes of all time, and this double feature event will give fans an opportunity to come together to celebrate the franchise,” Fathom Events VP of Studio Relations Tom Lucas said. “We are excited to partner with Warner Bros. again to bring back The Death of Supermanand introduce fans to Reign of the Supermen.”

“Warner Bros. is proud to join forces with Fathom Events to culminate the year-long celebration of Superman’s 80th anniversary with a double-feature big screen presentation of The Man of Steel’s most heralded adventure,” said Mary Ellen Thomas, Warner Bros. Home EntertainmentVice President, Family & Animation Marketing. “’The Death of Superman’ was a monumental moment in comics history, and these films – expertly produced by Warner Bros. Animation and DC – capture the enormity of that story in terms of both action and emotion. Seeing both films, on the big screen, gives the fans another vehicle to unite and celebrate this beloved Super Hero and this landmark tale.”