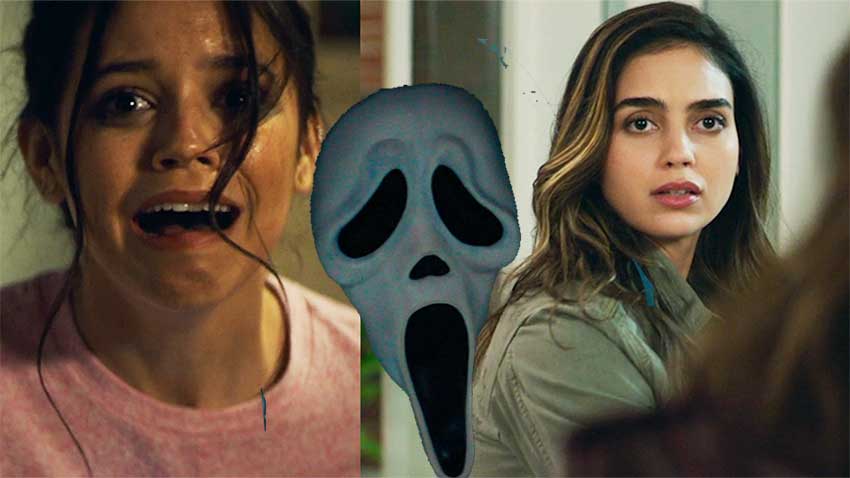 The town of Woodsboro has changed quite a bit since the SCREAM movie debut in 1996. The first trailer for Matt Bettinelli-Olpin and Tyler Gillett’s SCREAM movie revealed the residents of Woodsboro now look like every other American town with the casting of Melissa Barrera, Jenny Ortega, Jasmine Savoy Brown (The Leftovers, For The People) and Mason Gooding (BOOKSMART, Love Victor). Barrera and Ortega tease how the two Latinas fare in the horror franchise.

Twenty-five years after Ghostface terrorized Sidney Prescott and the town’s teens, a new killer dons the mask to commit copycat murders against a new set of teens. Sidney returns to Woodsboro to get to the bottom of the recent savage murders. Courtney Cox and David Arquette return as Gale Weathers and Dewey to help catch the menace behind the mask.

Naturally casting two Latinas in SCREAM was an exciting prospect but it seems Ortega falls victim to Ghostface’s knife in the new trailer. Things don’t look good for her character given that scene is eerily familiar to the opening kill with Drew Barrymore. Barrera on the other hand seems to be the movie’s lead.

What else can the proud Latinas Melissa Barrera (Vida, IN THE HEIGHTS) and Jenny Ortega (Elena of Avalor, You) reveal about their roles in SCREAM? CineMovie was lucky enough to chat with the actresses last year from their quarantined set.

tell CineMovie their ethnicity doesn’t play into the story rather they’re treated like your average American teen. Their presence, however, adds the Latino flavor to the latest installment of the SCREAM franchise.

Dylan Minnette says he rarely gets to be part of a diverse cast and it was the best experience of his acting career.

Arquette, whose Dewey character is no longer in law enforcement as revealed in the trailer, praised Barrera and Ortega.

Representation also comes in the form of a gay character, a first in the SCREAM franchise. Brown plays Mindy, a queer black woman.