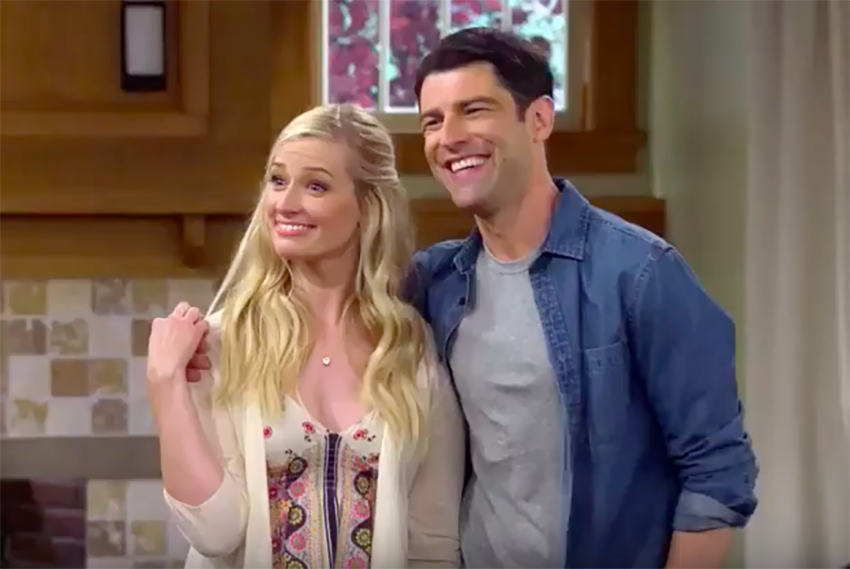 After "New Girl" and "2 Broke Girls" went off the air, Beth Behrs and Max Greenfield quickly made their way back to television with their new show, “The Neighborhood’ acting opposite Cedric the Entertainer and Tichina Arnold (“Everybody Hates Chris,” “Martin”). CineMovie went to "The Neighborhood" set in Studio City, CA (Los Angeles) to talk to two of the stars of CBS's controversial new fall show and why this sitcom was the right choice for them.

“2 Broke Girls” Beth Behrs and “New Girl’s” Max Greenfield play a married couple on “The Neighborhood” who move to a predominately black community in the Los Angeles area. Cedric the Entertainer is Calvin, a modern day Archie Bunker-type with some George Jefferson from “The Jeffersons” mixed in. “The Neighborhood” explores reverse discrimination in that Calvin is prejudiced against his white neighbors.

Ironically both Behrs and Greenfield came off shows with “Girl” in their title. Behr’s “2 Broke Girls” went off the air after six seasons in 2017 while Greenfield’s “New Girl” aired their last show this past May after seven seasons. Greenfield wasted no time in signing up for his next gig before his single camera sitcom went off the air.

"I didn't know what I wanted, Max Greenfield tells CineMovie. "I'd wanted to do a multi-cam for a really long time, but it obviously had to be the right one. They're not easy to do, and CBS feels like the right place to do it. So we have been talking for quite a while, even before 'New Girl' had ended, and then this came along and it was really hard to pass up because it felt like I may not get a better opportunity to do one of these."

Cedric The Entertainer On Playing A Prejudice Character On New CBS Show, The Neighborhood

Beth Behrs knew she wanted to work on another multi-camera as soon as "2 Broke Girls" ended.

"I wanted to get right back to work," she told CineMovie while the set of 'The Neighborhood.' "I love acting and I missed the live audience and I miss being like on a family set and all that. So that's really nice to be back."

"The Neighborhood" is not your traditional CBS sitcom, but that was part of the attraction for Behrs.

"I knew I wanted to be a part of a show that had some sort of social impact as my next show because I think our country is so divided right now and I think as artists, one of the main things we can do, is try to help bring people together because comedy is universal and feeling is universal, and that's what good television does... makes you laugh and the show will make people feel and make them think as well."

Greenfield reveals he had multiple offers for television, but "The Neighborhood" stood out.

"You want to separate yourself a little bit and it does, it does feel like it's a different type of show. It feels like it's taking a little bit of a different perspective. It's certainly addressing things that are very topical, and subjects that people have definitely have opinions about." 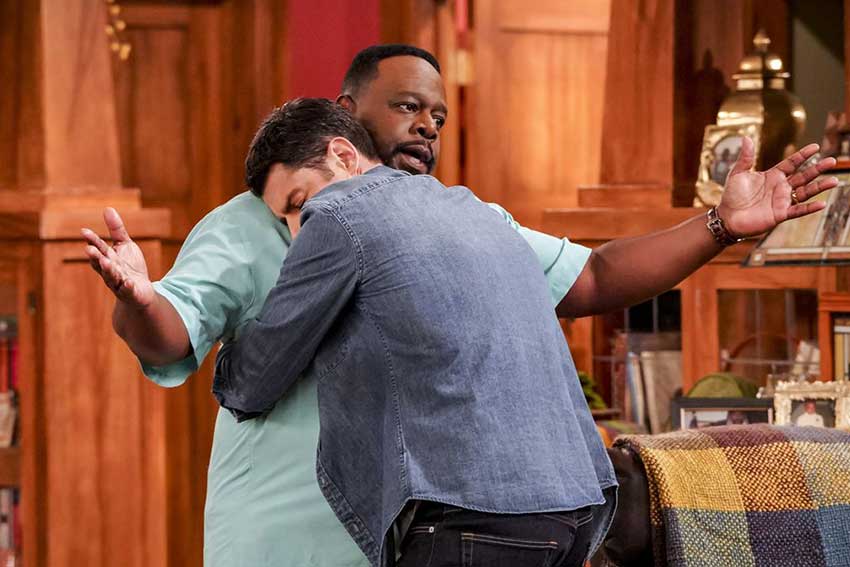 Greenfield admits transitioning from a single camera sitcom to a multi-camera sitcom with a live audience was tough, but he credits Behrs with helping him through the new format.

"We had worked together on a movie so we had known each other, and to have her on this because this specifically, this kind of show, a multi-cam, she had done for so long, so I'm often looking to her for advice."

Unlike his character on "New Girl," Greenfield's Dave character on "The Neighborhood" is a people pleaser and that has had a positive influence on his private life.

"There was an adjustment to playing a guy that is just so overly optimistic and positive and high energy and good natured. It's not what I did on the other show at all and it's just a life adjustment, but I also have found myself to be in a really good mood as a result of it."

Beth Behrs is also being enlightened by the show playing Gemma. She admits she's not up with the urban slang but like her character, she's learning from her neighbors.

"I definitely had to Google, which this might just be me being a nerd but "thirsty." Oh I know! I'm like such a nerd. Yeah, Gemma, I think there's a lot of Beth in Gemma, so I'm a pretty big nerd on the show too, but Tichina [Arnold] is teaching me, who plays Tina on the show, is teaching me how to be a little bit cooler."

Behrs also teases that her character of Gemma and Tichina Arnold's Tina will be the Lucy and Ethel of prime time television in later episodes when their adventures get them in trouble.

"THE NEIGHBORHOOD" premieres Monday, October 1 on CBS at 8pm.