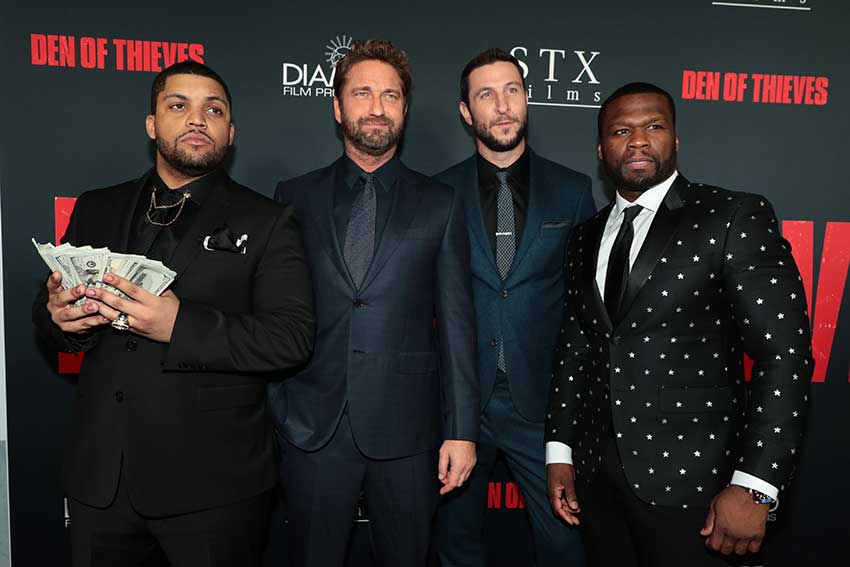 50 Cent and O’Shea Jackson Jr. get into the action genre alongside action star Gerard Butler in DEN OF THIEVES directed by first-time director Christian Gudegast. 50 Cent almost paid the price for performing his own stunts and Gerard Butler initially resisted gaining weight to become “Big Nick.”  The stars and director reveal what else happened behind the scenes on the set of DEN OF THIEVES.

DEN OF THIEVES is a gritty crime drama set in Los Angeles. An elite group of L.A. County Sheriff’s Department who call themselves the “Regulators” go after a bank robbery crew known as the “Outlaws” who plan to rob the Los Angeles Federal Reserve Bank.

Gerard Butler’s “Big Nick” heads the Regulators, the elite unit at LAPD’s Major Crimes. Before production, Butler says he weighed in at 200 pounds, but director Christian Gudegast wanted the actor to physically live up to the character's name.

“Let’s just call him Nick, said Butler at the Los Angeles press conference. “He’s like ‘He’s big Nick. He’s Big Nick. You gotta get big. You gotta get big.’ And I ended up gaining 25 pounds. You kind of have to around these guys because it’s probably the most masculine cast I’ve been around since 300. They’re all big.”

The largely male cast of DEN OF THIEVES went into extensive training. Gerard Butler and his team of actors playing the Regulators trained with undercover police while the Outlaws played by 50 Cent, Pablo Schreiber (13 HOURS, AMERICAN GODS) and O’Shea Jackson (STRAIGHT OUTTA COMPTON) went through military-style training for their characters. The actors talk about the training in the video below.

The actors threw themselves into the training full on, and they were able to perform the action with some hiccups.

“They all did their own stunts.” says Gudegast. “Their own shooting. The training was very specific.” He adds. “They were all completely in it. “They were all animals. 50 Cent fell on his head, almost broke his neck. It was no joke.”

Not many actors can say they know what it’s like being shot, but 50 Cent's past experience came in handy during production of DEN OF THIEVES.

“There’s a point where I get shot in the film. I did and Christian was like ‘you didn’t do that the right way. Trust me I know…” (laughter from the cast)

There are no “good guys” in DEN OF THIEVES. The director who also wrote the script blurs the line between good and evil, shaking up the “cops and robbers” formula.

Butler as the leader of the Regulators and Pablo Schreiber as the boss of the Outlaws keep up the tough guy stance throughout the film as it culminates towards an explosive showdown. The actors kept up their testosterone-fueled rage in between scenes by pumping weights.

“You can always find me behind my SUV pumping weights,” says Butler. “He’s over there. See that shadow moving up and down. It’s not what you think. He’s just lifting weights.”

The rest of the cast joked that they grunted and drank beer in between. Butler added Gudegast was more concerned where the food was at. “That’s pretty much his MO.” 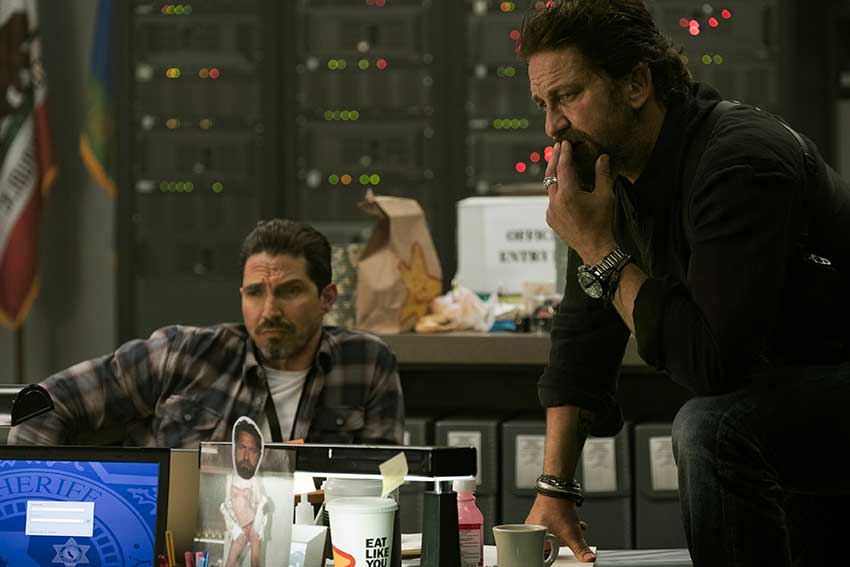 To bring authenticity to DEN OF THIEVES, Gudegast visited the Los Angeles Federal Reserve Bank so what you see in the movie as far how money is handled is accurate. While a heist is possible in this crime drama, don’t try this at home.

DEN OF THIEVES is now playing in movie theaters.