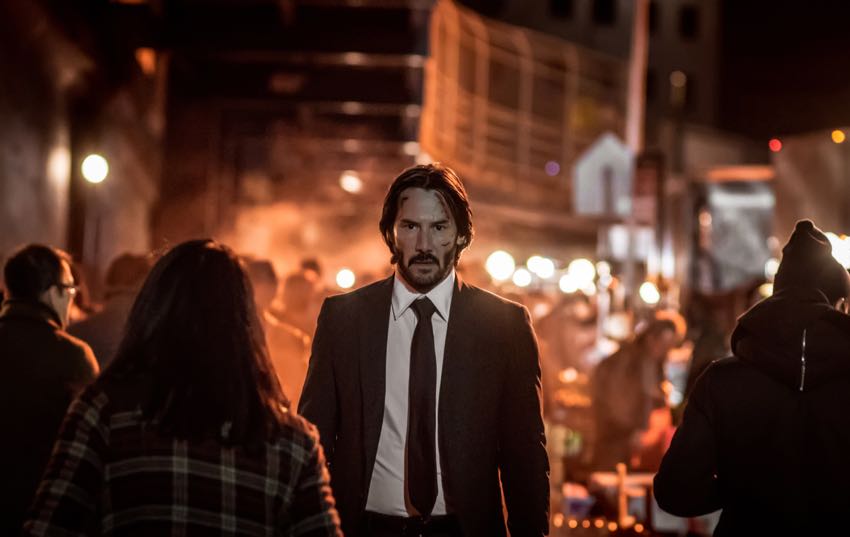 Keanu Reeves is back more ferocious than ever in JOHN WICK: CHAPTER 2, and as we can imagine, shooting the sequel to 2014 hit was no easy task. Reeves, Ian McShane, newcomers Common, Laurence Fishburne and director Chad Stahelski reveal some cool behind the scene facts in the making of JOHN WICK: CHAPTER 2.

Retired super assassin John Wick unleashed mayhem on the Russian mobsters who killed his dog and stole his 1969 Mustang.  In JOHN WICK: CHAPTER 2, he’s ready to put his skills to rest until an old associate forces him back into being a killing machine.

At a Los Angeles press conference, the JOHN WICK: CHAPTER 2 stars and filmmakers share some details behind making the action-packed sequel.

There are twice as many dangerous car stunts and fighting scenes in the follow-up to JOHN WICK 2 which ups the ante of the previous one. The stunts were so ambitious and perhaps a bit dangerous that the producers didn’t exactly give exact details to studio executives at Lionsgate.

“If they knew some of the stunts some of the things Chad made the actors do - maybe we wouldn’t have had approval, but we did it anyway,” says JOHN WICK producer Basil Iwanyk.

To cover his behind on those left out details, director Chad Stahelski added, “The cast were all very well trained, right?”

Keanu inserts his own disclaimer. “No animals were hurt in the production of the film.” 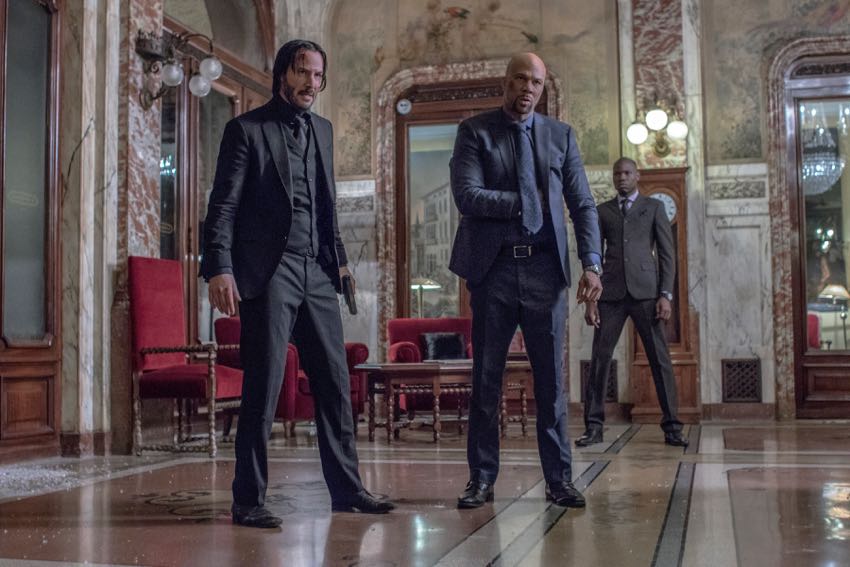 Everyone’s dreamed of a Morpheus and Neo reunion, and so did Laurence Fishburne who’s been wanting to team up with Reeves once again. The opportunity came when Reeves visited his Matrix co-star at his home. When the subject of JOHN WICK came up, Fishburne told his old pal how “sick” the movie was and asked if he could be part of the sequel.

Reeves was shocked Fishburne had watched JOHN WICK and secondly that he liked it. “Wait, you watched it,” Reeves recalls asking the actor.

Once Reeves knew his friend wanted to be part of the follow-up, he took the idea back to the director and writer. Writer and creator of the characters Derek Kolstad admits Fishburne’s mysterious Browery King character was “designed” for Fishburne. "That's lovely," replies Laurence to the writer's admission. 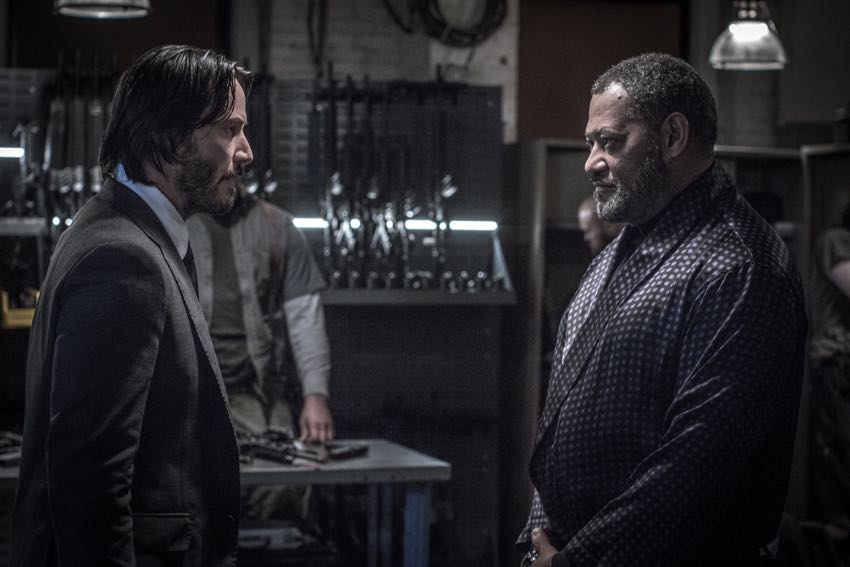 As John Wick, Reeves takes down his enemies with Brazilian jiu-jitsu, Glocks and even a pencil. In real life, Reeves says he’s no fighter.

“I don’t really know any jiu-jitsu or judo or anything.  I do movie kung fu,” jokes the actor. “You can fake a punch but you can’t fake a judo throw. You can get help from the person you’re throwing and kind of launch themselves.. Thank you Common. … and then also at the same time, Common got really good at throwing people and me too. It’s really a cooperation. In the real world, I don’t do any of that.”

Common says otherwise, and thinks his co-star can kick ass in real life.

“You feel his strength. You better move or it’s going to connect,” according to Common who plays his nemesis. “He may not want to be in any MMA competition but I definitely know he’s the warrior that we see John Wick as.

Common also revealed Reeves is a perfectionist just as he is, and on set and in rehearsal, he gives “110% of himself.”

During fight rehearsals, Reeves admits they repeated the mano-a-mano sequences until they got the “flavor.” “We gotta get the flavor,” Reeves blurted out in the conference when Common was describing how they went about getting the ballet of fists well coordinated.

However, training and preparation was sometimes not enough on set when the director changed the choreography on the day of shooting.

“Chad will flip it on you on set,” reveals Common.  “You got to be present and aware.”

Common is not complaining, but merely points out that as an actor you have to be mentally and physically challenged to change it on a dime. 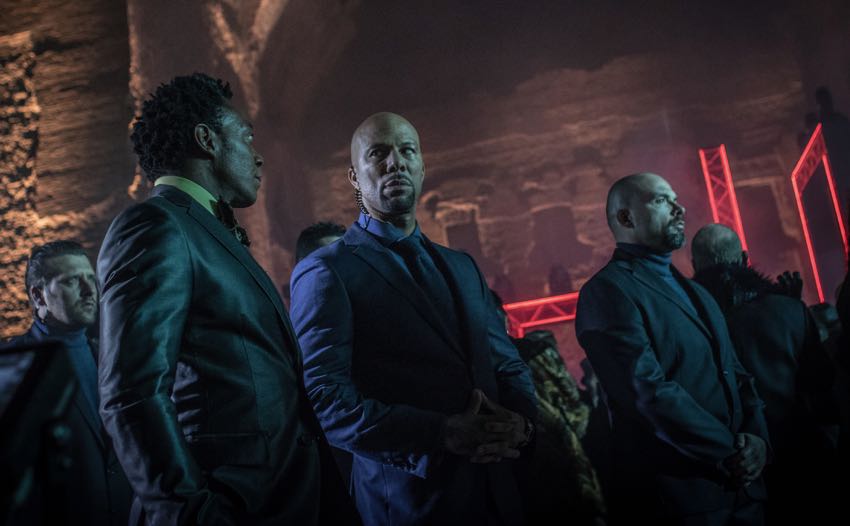 The shadowy assassins guild is taken international in the sequel as the John Wick world is expanded to Rome and we meet other deadly killers from that underworld.

The original writer Derek Kolstad returned to expand that world. The story in JOHN WICK: CHAPTER 2 went through many iterations, says Kolstad. While writing, he kept in mind, “Is this true to the core.” He stayed faithful to that idea, but he also didn’t want to show his whole hand in the follow-up. If the movie leaves the assassin’s world unanswered - that’s on purpose.

“You allude to a world but you never show all of it because as soon as you reveal the shark - it’s not as cool. We always went by that guideline.”

Director Chad Stahelski learned how to create a cinematic world by working with the Wachowski siblings on the MATRIX movies for over 10 years. On the MATRIX movies, the former kick-boxer served as Keanu Reeve’s stunt double and he went on to work as a stunt coordinator for several action films (THE HUNGER GAMES, SHERLOCK HOLMES) and as a second unit director (CAPTAIN AMERICA: CIVIL WAR, HITMAN: AGENT 27). JOHN WICK was Stahelski’s directorial debut.

The 48-year-old JOHN WICK: CHAPTER 2 director applied what he learned on the MATRIX to the JOHN WICKS movies.

He adds that “painting” a world doesn’t start with the visuals or set pieces, but with the characters. 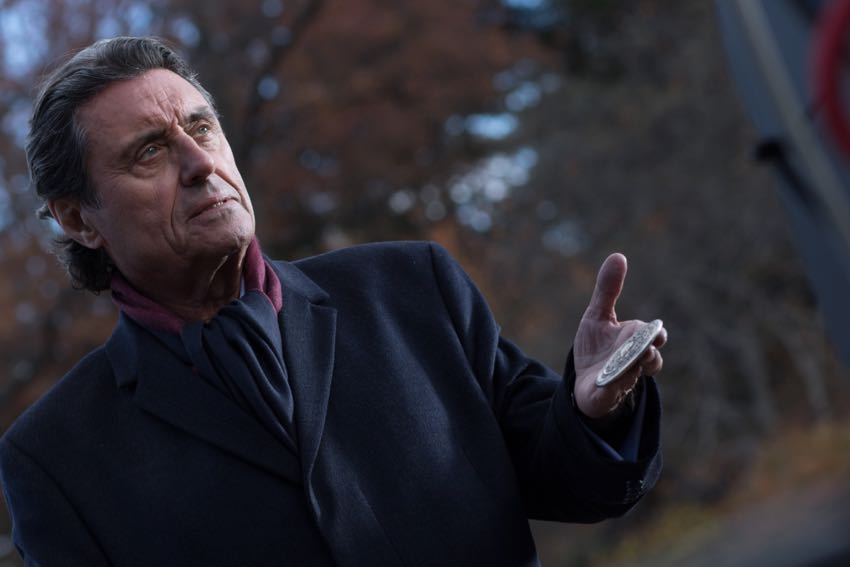 In an outdoor scene, Ian McShane has an intense discussion with John Wick. When asked about his acting process during the scene, McShane joked he wasn’t acting.

“I think you’re confusing intensity with being f****ing cold.”

The director confirms it was a very cold day for that shoot.