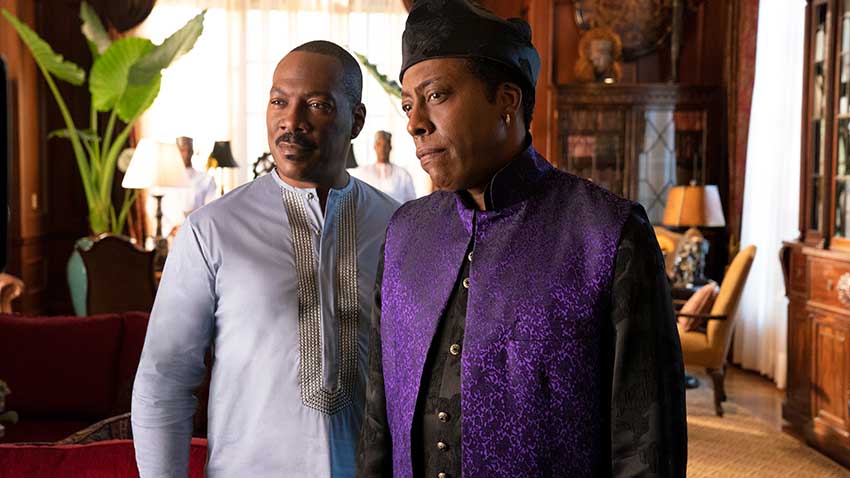 Eddie Murphy and Arsenio Hall's return as Akeem and Semmi in COMING 2 AMERICA became the #1 streaming movie around the globe on Amazon Prime. Amazon Prime Video released a press release stating the movie's massive opening weekend broke records as the most watched movie so far in 2021, and the last 12 months.

While there are no exact numbers given in the announcement, the ranking comes from a 3rd party Screen Engine/ASI’s weekly PostVODTM.

For more about the #1 movie in the world, see the official press release below.

Jennifer Salke, Head of Amazon Studios said, “The Zamunda Royal family has arrived and audiences around the globe welcomed them enthusiastically! The premiere of Coming 2 America has far exceeded any of our wildest expectations. It’s clear an entire new generation of fans have joined the enormous loyal fanbase who already adored the magical world created by global phenom Eddie Murphy, the incredibly talented filmmaking team and the hilarious, all-star cast of existing and newly-cemented legends. COMING 2 AMERICA is the perfectly fun, celebratory, escapist, feel-good comedy movie that worldwide audiences needed.”

Currently Coming 2 America has over 12,000 enthusiastic customer reviews on Prime Video, which became the #1 downloaded app for Entertainment (on the App Store) and #2 downloaded app across all Free apps over the debut weekend. As of March 6, the film is the “most-talked” about movie on Twitter released in 2021 according to social media data analysis from ListenFirst Media. During opening weekend, it continued to trend nationally on Twitter across multiple subjects and conversation threads. Notable social posts include LeBron James, Regina King, Gladys Knight, Ice-T, Chance The Rapper, Alicia Keys, Amy Schumer, Tracee Ellis Ross, Ayesha Curry, Snoop Dogg and Kerry Washington.

“COMING 2 AMERICA is a quintessential film in pop culture, as such, we needed a campaign at the intersection of marketing and culture” says Ukonwa Ojo, Global Chief Marketing Officer, Prime Video and Amazon Studios. “For the past 33 years, the original 1988 film has been regarded as one of the most iconic films in the Black community. We wanted fans of Eddie Murphy and the original blockbuster to be surprised and delighted with every experience because we were passionate fans too!”

In the lead up to the film’s release on Friday, March 5, Prime Video executed an extraordinary global marketing campaign kicking off with a television spot debut during Super Bowl LV, and the relaunch of the original 1988 movie on Prime Video in celebration of Black History Month. Additionally, Amazon Studios and Prime Video produced infomercials showcasing iconic elements from the original movie like Soul Glo, Randy Watson and Sexual Chocolate and My-T-Sharp Barbershop. During week of release, Prime Video partnered with Amazon Transportation to reimagine a fleet of delivery vehicles, trucks and a Prime cargo airplane in key US markets in celebration of the return of King Akeem (Murphy).

On an international level, Amazon Studios collaborated with Nigerian and South African local distributors making the film available in theaters nationwide in both countries. The film is currently #1 in Nigeria and West Africa, where it is the biggest March opening for a film sinceBlack Panther in 2018, as well as being the highest opening for any Hollywood film sinceHobbs and Shaw in August 2019. In South Africa, the film achieved the highest opening for 2021 to date putting it currently at #1 in that country.

The internet was on fire on premiere day with aTikTok Dance Challenge featuring the song “I’m A King” from the film’s official soundtrack, and with the help of choreographer Fatima Robinson, influencers and participants danced in celebration of their inner royalty. The dance challenge resulted in 5.6 billion global views on TikTok.The global launch culminated with the official Coming 2 America Royal Watch Party on Twitter hosted by Dionne Warwick, and an IG Live after-party with Nigerian singer/songwriter Tiwa Savage. The watch party generated the highest engagement than any other previous Prime Video movies.