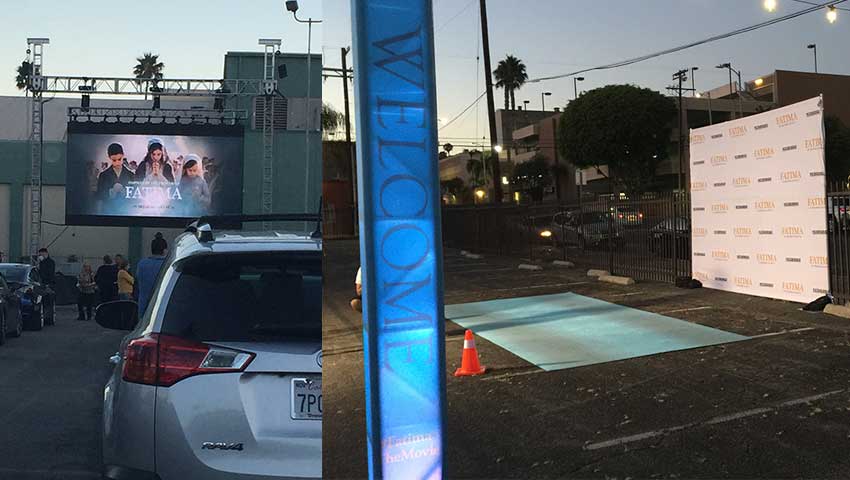 Studios are finding new ways around the COVID-19 pandemic, and Sunday night Picturehouse held their first movie premiere for FATIMA in the "new normal" as a drive thru red carpet and drive-in screening. See the photos from the fun night.

Movie theaters are closed due to the COVID-19 pandemic so Picture House improvised with a drive-in premiere screening for their faith film, FATIMA, a true story of the appearance of the Virgin Mary to three young shepherds in 1917 Portugal.  FATIMA opens August 14 in drive-ins and VOD.

Held in Hollywood, CA at the Hollywood Palladium's parking area, goodie boxes were handed out once you arrived, and then you were steered to the blue carpet and backdrop to roll on through for a photo op in your car.  The drive-thru red carpet was a nice touch. The goodie box contained face masks with the film's title, popcorn bags, a few sugary snacks and flavored waters.

FATIMA stars Harvey Keitel (THE IRISHMAN), Sonia Braga, Goran Visnjic ("ER")  and Joaquim de Almeida ("Warrior Nun," "Queen of the South") but none of the actors were present except for the producers.

On the technical side, the screen was small and the FM audio transmitter was not working properly because of interference from the tall buildings nearby. After watching a movie at the Tribeca Drive-in at the Rose Bowl with the giant screen, this one paled in comparison.  As for the audio, large speakers provided the movie's sound, although not ideal it was audible.

The FATIMA movie is an uplifting drama about the power of faith. Based on a true story, a 10-year old shepherd and her two young cousins in Fátima, Portugal during the World War I see visions of a woman they think is the Virgin Mary. When it comes out that these three children are having visions, many flock to their village looking for hope and miracles. However, the Church and the local government threaten the children to recant their revelations as lies. As the word spreads, thousands of pilgrims flock tothe site of the visions.

FATIMA runs approximately two hours, but the film feels longer since the story treads familiar ground repeatedly. Sitting in a car far from the screen was also a bit distracting, but the picture looked very good.