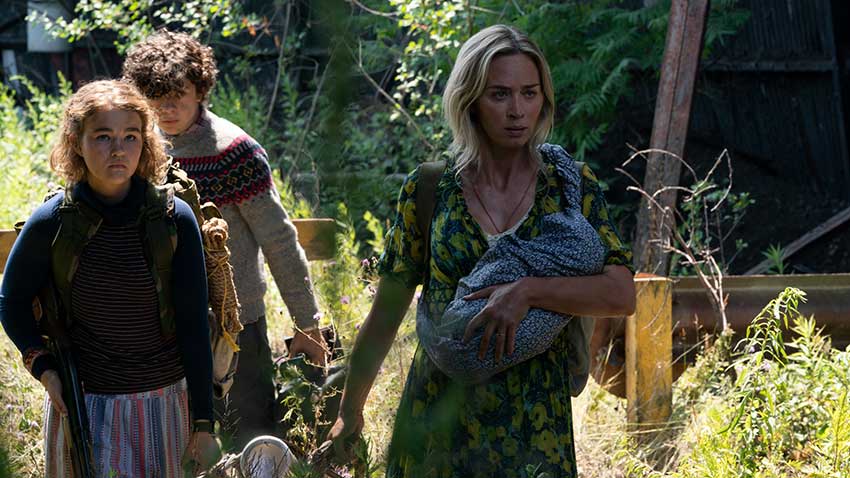 In A QUIET PLACE you can hear yourself and others chomping on popcorn because of the absence of sound and dialogue which made it unique and suspenseful. The sequel is a lot noisier but that’s not a bad thing.

Emily Blunt, Millicent Simmons and Noah Jupe return with John Krasinski in the director’s chair again in A QUIET PLACE PART II. Krasinski makes an appearance in the film even though he was killed off in the original. He starts the film with events just prior to the alien invasion, which allowed him to be in it.

Then A QUIET PLACE PART II picks up exactly where we last left the Abbotts. The remaining family go in search of help, and run into an old acquaintance played by Cillian Murphy.

This time around there is more dialogue and bigger action sequences. It’s not as quiet and subtle like the first with more action scenes. Here the scares are more sudden while in the original the tension arose from the prolonged scary scenarios with the monsters. We see more of these auditory aliens now that the cat is out of the bag as to what they are.

Aside from directing, Krasinski went solo on writing the screenplay. Krasinski didn’t take the easy route by repeating the same gimmicks that made the first one a favorite among critics and the audience.

The scares in PART II take you by surprise and will cause many viewer’s heart to stop for a moment or jump out of their seat.

Millie Simmonds is the stand out again in A QUIET PLACE PART II as Regan. She takes charge, feeling empowered that she has the key to stopping the alien monsters. Emily Blunt takes a back seat to let the young stars shine.

While A QUIET PLACE PART II is a worthy follow-up with suspenseful sequences and a bigger budget, the original was more groundbreaking.

A QUIET PLACE PART II is in theaters May 28.