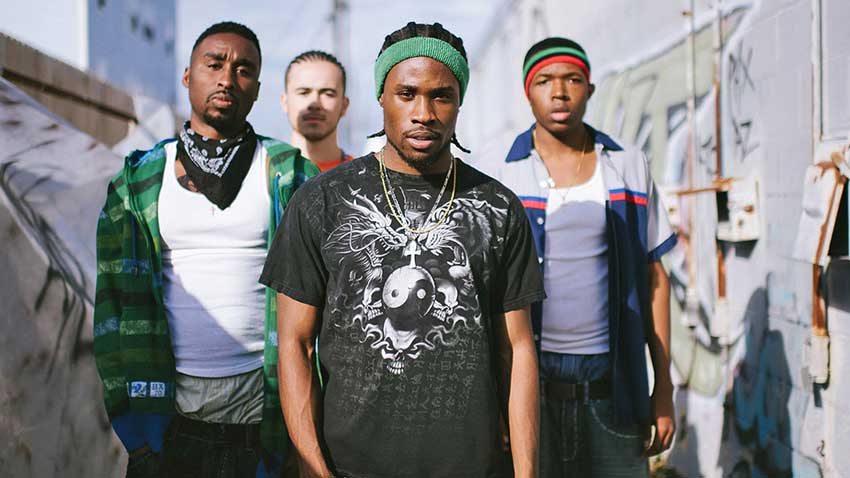 RZA directs the riveting and timely, CUT THROAT CITY, a crime thriller that explores the reasons why black men turn to crime when there are no other options available. The film which is now playing in movie theaters, stars a solid cast with Shameik Moore (INTO THE SPIDER-VERSE, DOPE), Ethan Hawke, Terrence Howard, Eiza Gonzales, Wesley Snipes and Tip T.I. Harris. If you liked SET IT OFF (1996) starring Jada Pinkett-Smith and Queen Latifah, this is a more violent male version of that film.

This violent urban drama pulls you in with compelling characters right away. The setting is post Katrina New Orleans' Lower Ninth Ward, and Blink (Moore), Miracle (Demetrius Shipp Jr), Andre (Denzel Whitaker) and Junior (Keean Johnson) have no means of supporting themselves and their families after the flood devastated the community. Blink is a struggling comic book storyteller and artist, Andre a saxophone player, Junior is hoping to become a dog breeder and Miracle is a small-time dealer. When all hope is lost, the four childhood friends turn to a violent gangster (T.I.) who assigns them a casino heist.  When the heist is a bust, the four friends are on the run from Detective Valencia (Eiza Gonzales) and the New Orleans' criminal underworld.

CUT THROAT CITY starts out strong but when Ethan Hawke's local councilman and a corrupt undercover detective (Isaiah Washington) get involved in clearing "the boys," the plot becomes convoluted. The subplot veers into commentary about corrupt politicians and law enforcement, and the conspiracy theory that the government blew up the levees which lead to the flooding of mostly poor and black communities. While it's relevant and needed information for context, it detracts from the young men's plight which you are now invested in. For example, Terrence Howard's stylish "godfather" of New Orleans shows up in the third act throwing out cheesy biblical references. Then you get more commentary on why things are the way they are in an unnessary scene between Howard's "The Saint" and Hawke's councilman. RZA and screenwriter P.G. Cuschieri drive the point home that disadvantaged communities are designed. Most people believe that anyway so it's like "tell me something I don't know" kind of thing.

While it has its distractions, CUT THROAT CITY is compelling from start to finish.  It's another woke film that is relevant in these times when the Black Lives Matter movement is gaining traction outside the black community. Setting the story post Katrina as the backdrop for these young marginalized men drives home the issues facing most undeserved communities in the U.S.  FEMA was largely criticized for failing the people of New Orleans then, and CUT THROAT CITY brings the human side to this tragedy that we haven't seen before.

Director RZA brings an urgency to the drama and realistic scenarios that will leave you feeling like you just watched an action movie based in reality.

CUT THROAT CITY is definitely one to enjoy at a drive-in if movie theaters are closed in your area.