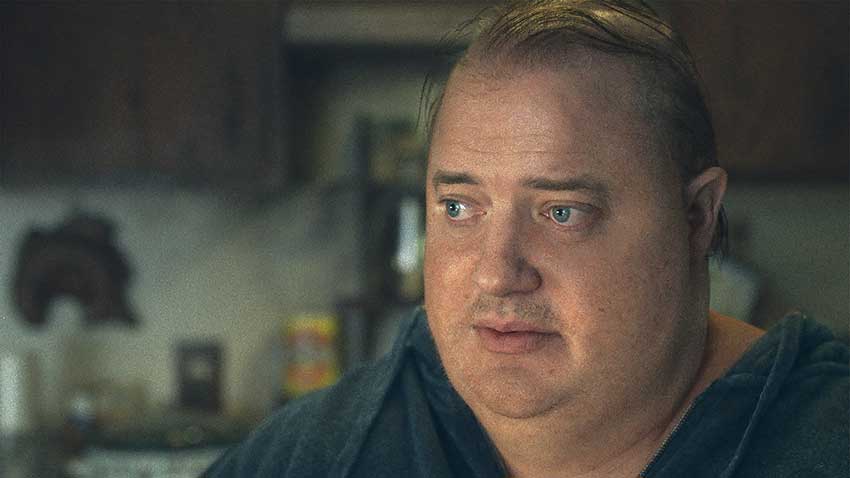 Darren Aronofsky is back with another divisive movie in THE WHALE. THE WHALE star Brendan Fraser received an 6-minute standing ovation at the 79th Venice Film Festival after the screening for his portrayal of a reclusive obese man but the critics aren’t entirely praising Aronofsky’s latest effort and two critic’s choice of words in their reviews are in poor taste.

THE WHALE premiered Sunday at the 79th Venice Film Festival. Based on Samuel D. Hunter’s play by the same name, Darren Aronofsky tackles the tricky subject matter of a morbidly obese man (Brendan Fraser) coming to grips with his dire situation. Charlie is an online English teacher and a recluse who’s ashamed to show his face to his virtual students. A visit from his estranged daughter, Ellie (Sadie Sink) and a stranger (Ty Simpkins) force him to re-evaluate his past wrongs before his time is up.

Many are calling this Brendan Fraser’s comeback but he never really went away. He merely stepped away from the limelight in a self-imposed hiatus. He’s worked fairly consistently in smaller roles throughout the years. THE WHALE does mark his return as the lead, and it’s one that everyone is talking about the transformative role in Aronofsky’s movie. On Rotten Tomatoes, about two dozen critics have given the drama an 87% score, mostly crediting Fraser's performance for their positive reaction.  However, some do find issues with Aronofsky's storytelling and find similarities with his past work.

Comparisons to THE WRESTLER often come up in the early reviews from the festival.

"Most striking, though, is the correlation with REQUIEM FOR A DREAM (2000), in the mental disintegration of Ellen Burstyn’s strung-out character Sara: Charlie represents a similar, very literal kind of body horror, trapped by a self-punishing compulsion to eat that becomes more understandable as the film progresses."

Wise believes the film will be an awards contender for Fraser and Best Picture. Others, however, don't consider THE WHALE a standout.

"THE WHALE stays too intellectual in its exploration of the physical and spiritual dimensions of redemption to and from bodily captivity. This comes at the expense of the director's strengths in the visceral realm. It restricts what could have been a truly great comeback performance from Brendan Fraser into being merely a good one."

"The Whale did not move me because most of the character interactions announced themselves loudly and with increasing frequency. It is inorganic, gimmicky, manipulative, and its lessons are simplistic. As a character, Charlie remains mostly a body. He has a kindness to him, but this role is mostly to react to the wants and needs of others."

Other critics from large publications chose to criticize THE WHALE with offensive words and fat puns that seem disrespectful towards Fraser and the character he plays. The mean-spirited nature of their words is difficult to read and brings up the question of whether it was much worse before their editor toned it down prior to publication.

The Guardian's Peter Bradshaw right off the bat makes bad puns in his title, "The Whale review – Darren Aronofsky’s latest is a hectoring invitation to blubber." Followed by the subheader, "It’s hard to feel much sympathy for Brendan Fraser’s morbidly obese English teacher in this much anticipated but disappointing return to movies."

However, he contradicts himself later when describing how Fraser brought about a "definite gentleness and openness to the role of Charlie."

"Charlie is morbidly obese, a giant pool of Jabba the Hutt-type flesh, hardly able to leave the couch with a walking frame to get to the lavatory, gorging delivery pizzas and fried chicken, with a stash of chocolate bars in the desk drawer."

Much worse than The Guardian's take is Owen Gleiberman's questionable description of Fraser's own appearance and body of work.

"Fraser was always, in the best way, a lightweight actor: the clear blue eyes, the pin-up sexiness, the shaggy warm boyish innocence. The fact that, at 53, he’s no longer as beautiful as he once was is part of the Brendanaissance. He can no longer hold the screen as a cutie-pie hunk; he has to do it in other ways."

He does refer to Fraser as a better actor but why disparage him in that way?

That's not even the most insulting portion with yet another reference to Jabba the Hutt and a jab at Fraser's former looks as "remnants of the Fraser handsomeness.

"The sloping jowls that consume his neck, the big wide back and gigantic jelly belly that spills down over his crotch, the arms and legs that are like meat slabs — Charlie is a mountain of a man, but he’s all of a piece. Fraser, with sweaty thinning hair plastered on his scalp, resembles an overstuffed Rodney Dangerfield. The actor sinks himself into that body, so that even as we’re gawking at a fellow the size of Jabba the Hutt we register the familiar soulful look in the eye, the distended remnants of the Fraser handsomeness."

It’s not uncommon for critics to have fun with wordplay but the latter two are in some serious need of sensitivity training.

Audiences will have their own take when THE WHALE opens in December 9.