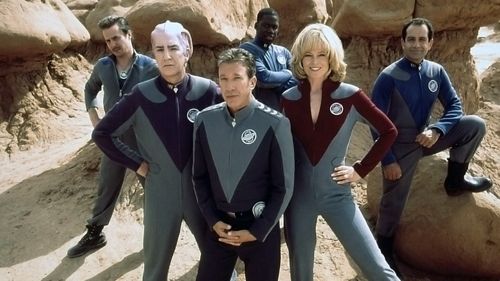 Marvel's GUARDIANS OF THE GALAXY is one funny intergalactic romp featuring a Han Solo-type lead, a tough, green chick, an angry, talking raccoon, a walking stump and some colorful aliens. So to celebrate the release of Marvel's sci-fi adventure August 1st, here are nine other films featuring some comedic, extraterrestrial creatures trying to save the world or destroy it.

2. Spaceballs (1987)
The Mel Brooks spoof of Star Wars is a classic when it comes to intergalactic comedies which featured John Candy, Rick Moranis Bill Pullman and Daphne Zuniga.

Tim Allen, Sigourney Weaver, Alan Rickman, Tony Shalhoub and Sam Rockwell play t.v. actors from a space TV show a la Star Trek who think they are reprising their roles only to find out that they really have to fight an alien invasion.

4.  Mars Attacks! (1996)
While it was blasted by critics, its a personal favorite from Tim Burton in which Martians invade Earth, and hilarity ensues.

5. Men in Black (1997)
Will Smith and Tommy Lee Jones meet lots of whacky aliens, some good and some bad. And they don't even have to leave Earth.

A harmless alien encounters two comic-book geeks on Earth who must save him from the men in black.

7. Space Jam (1996)
Michael Jordan travels into space to help the Looney Tunes vs. aliens in a game of basketball.

8.    Any Star Trek Show or Movie
The TV show did take you where no man has been before in the 60s with travel to different outer worlds that made aliens cool.

9.    RocketMan (1997)
Harland Williams stars in this sci-fi comedy as an unlikely hero who travels to Mars with a chimp and all sort of shenanigans ensue.

10.    The Hitchhiker’s Guide to the Galaxy (2005)
The Hobbit's Martin Freeman, Mos Def and Sam Rockwell and Zooey Deschanel go for laughs in this trippy sci-fi adventure in which they have to save the Earth once again.