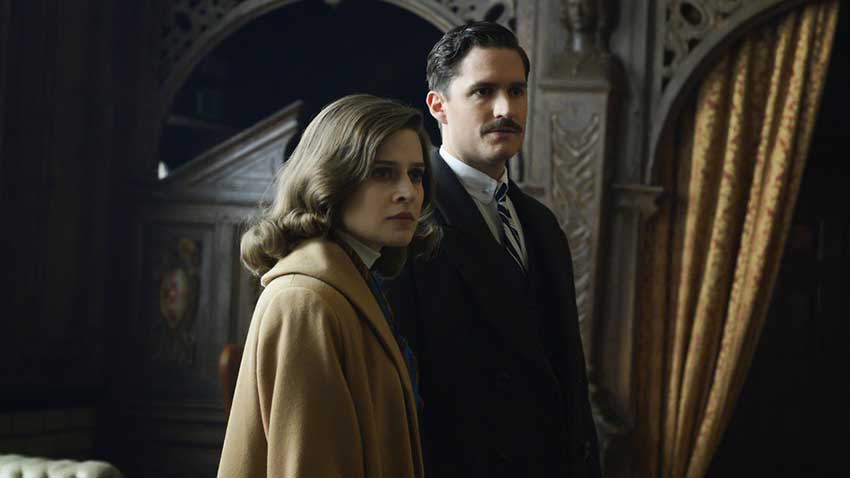 On DC Fandome part two Saturday, "Pennyworth" executive producer Bruno Heller announced Martha Kane (Emma Paetz) has a bun in the oven in the second season. Bruce and Martha are not married yet, so it'll be interesting to see if the baby is Bruce Wayne and whether there's a shotgun wedding. The DC character Lucius Fox will also be entering the picture in the sophomore outing. Read the official announcement.

On Saturday, September 12 during the Pennyworth panel at DC FanDome: Explore the Multiverse, it was announced that Martha Kane will find out she's pregnant but is it with the future caped crusader in the second season?

Another familiar name joining the next season is Lucius Fox, Wayne Enterprises' business manager. That news came from the first DC Fandome held in August. No actor has been cast in the role or at perhaps they're not revealing at this time. Morgan Freeman last played the character in the Christopher Nolan Batman films.

The official announcement doesn't reveal much about the next season but it does reveal James Purefoy is joining the DC show airing on EPIX.

BURBANK, Calif. (September 12, 2020) — In the upcoming second season of Pennyworth, the DC drama series that follows Alfred Pennyworth (Jack Bannon) in 1960s London where he works with young billionaire Thomas Wayne (Ben Aldridge), it will be discovered that Martha Kane (Emma Paetz) is…pregnant!

During the Pennyworth panel at DC FanDome: Explore the Multiverse on Saturday, September 12, executive producer Bruno Heller shared the happy unexpected news with the parents-to-be-by-acting-proxy Emma Paetz and Ben Aldridge. (It was previously revealed during the DC FanDome: Hall of Heroes event on August 22 that DC character Lucius Fox would be joining the series in season two.)

Based on characters created for DC by Bob Kane with Bill Finger, Pennyworth was developed by Bruno Heller, who executive produces with Danny Cannon and Matthew Patnick. The series airs on EPIX in the U.S.