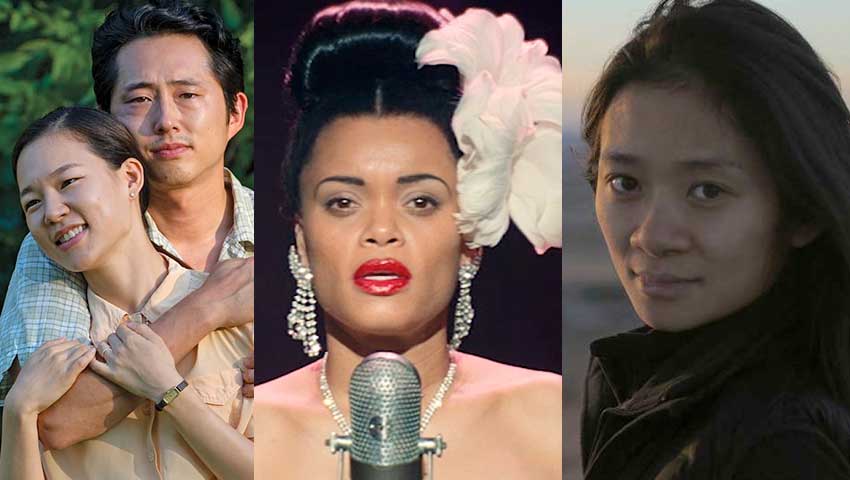 For the first time, two women are nominated in the Best Director and Best Picture categories while three Asian-Americans were included in the prestigious Academy Award nominations this year. Hollywood is definitely making strides in diversifying in front and behind the cameras, but sadly there's more work to be done for Latinos who were completely shut out when Guatemala's entry LA LLORONA, a powerful film about genocide, was snubbed. However, this year's nominations mark a significant advancement for people of color. Below are some of the groundbreaking nominations.

For the first time in Academy Award history, five nominees are of Asian descent. Steven Yeun of MINARI, The Walking Dead alum, is the first Asian-American to be nominated in the Best Actor category. He's competing with SOUND OF METAL's Riz Ahmed, the English-born actor of Asian ancestry, and Chadwick Boseman for MA RAINEY'S BLACK BOTTOM.

Black Americans are also well-represented this year dominating in the acting categories. JUDAS AND THE BLACK MESSIAH scored two nominations in the Best Supporting Actor for Daniel Kaluuya and LaKeith Stanfield vying for the same award along with Leslie Odom Jr. for his role as Sam Cooke in ONE NIGHT IN MIAMI. JUDAS AND THE BLACK MESSIAH, however, did score six nominations for Shaka King for Best Original Screenplay, Best Picture, Best Song and Best Cinematography.

Sadly, Spike Lee's DA 5 BLOODS earned only one nomination in the Original Song but was snubbed in all the other categories. Such a shame considering the stellar cast and Delroy Lindo's magnificent performance.

Overall, you have to applaud the significant advancement in representation, and the quality of films this year has greatly improved which can be attributed to giving the underserved more of a voice.  Although there is work to be done for another group that makes up a majority of this country -  Latino-Americans.

This year's ceremony will air Sunday, April 25, on ABC.

"Judas and the Black Messiah"

"The Trial of the Chicago 7″

ACTOR IN A SUPPORTING ROLE
Sacha Baron Cohen, "The Trial of the Chicago 7"

INTERNATIONAL FEATURE FILM
"Another Round" - Denmark

"The Man Who Sold His Skin" - Tunisia

"A Concerto Is a Conversation"

"A Love Song For Latasha"

ORIGINAL SONG
"Fight For You" from "Judas and the Black Messiah"

"Hear My Voice" from "The Trial of the Chicago 7"

"Husavik" from "Eurovision Song Contest: The Story of Fire Saga"

"A Shaun the Sheep Movie: Farmageddon"

"One Night in Miami"

"The Trial of the Chicago 7"

ACTOR IN A LEADING ROLE
Riz Ahmed, "Sound of Metal"

Vanessa Kirby, "Pieces of a Woman"

DIRECTOR
Thomas Vinterberg, "Another Round"

Dariusz Wolski, "News of the World"

Phedon Papamichael , "The Trial of the Chicago 7"

"If Anything Happens I Love You"

"The One and Only Ivan"

"The Trial of the Chicago 7"