New 'Godzilla vs Kong' Trailer: What To Know About The Epic Monster Mashup 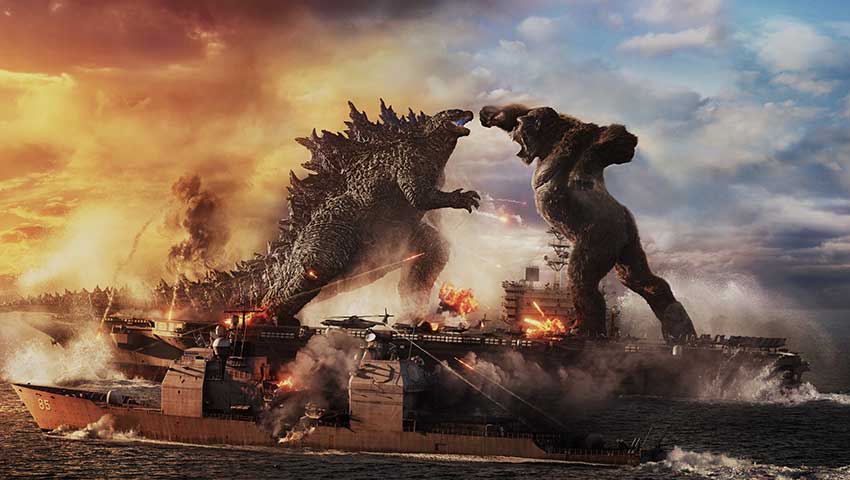 The first full-length trailer has arrived for the most anticipated monster mash-up ever.  The new preview reveals much about the GODZILLA VS KONG plot. Watch below and learn.

Kaiju fans will no doubt have a difficult time choosing sides.  Are you Team Godzilla or Team King Kong? Perhaps what's revealed in the new preview will help you out.

New #GodzillaVsKong has arrived. Who are you rooting for?

In this new look, Godzilla is not feeling himself as Kyle Chandler's character indicates he's hurting humans. In the Japanese films, the King of Monsters has been portrayed both as a hero and a villain. In the last two American films, he has been the good guy but that's not the case in GODZILLA VS KONG. Millie Bobby Brown's character is on a mission to find out why Godzilla is more destroyer than savior.

However, there are clues that it may not be Godzilla acting out of character. Some are speculating that mechagodzilla will make an appearance. One scene with a new character features what looks like a sketch of a mechanical kaiju behind him. Afterall, KING OF MONSTERS did end with one of the severed heads of King Ghidorah being sold off to a black market. That could be used to generate a new kaiju much like they did in JURASSIC WORLD. I'm all in for that.

As far as King Kong, he is taken from his home and we know from previous incarnations, that never works out. Instead of a blonde woman soothing the savage beast, a young girl presumably from his island, has captured the big ape's heart. Like Godzilla in the previous two movies, we will get an origins story for Kong as well.

Godzilla and Kong are not the only kaiju in the film. Kong fights giant flying monsters but are they flashbacks to the myth or have they also arisen in present day? That would give a reason for Kong and Godzilla to team up to fight a common enemy.  That's just wishful thinking but there is precedent. Godzilla in the Japanese films often teamed up with other kaiju against a shared enemy. That would certainly make it easy for us fans who don't wish for either party to perish, although the trailer suggest "One Wiil Fall."

We can expect a monster blow out between the two beloved giants that deserves to be seen on the big screen, but unfortunately most Americans will have to experience it on the small screen on HBO Max March 26 because of the pandemic. While some theaters are open, audiences have not been flocking to cinemas during this time.  Some on Twitter have expressed they may break quarantine to take the chance to watch in IMAX theaters.  It's tempting.

From Warner Bros. Pictures and Legendary Pictures comes the long-awaited face-off between two icons in the epic adventure “Godzilla vs. Kong,” directed by Adam Wingard.

Legends collide in “Godzilla vs. Kong” as these mythic adversaries meet in a spectacular battle for the ages, with the fate of the world hanging in the balance. Kong and his protectors undertake a perilous journey to find his true home, and with them is Jia, a young orphaned girl with whom he has formed a unique and powerful bond. But they unexpectedly find themselves in the path of an enraged Godzilla, cutting a swath of destruction across the globe. The epic clash between the two titans—instigated by unseen forces—is only the beginning of the mystery that lies deep within the core of the Earth.

Warner Bros. Pictures and Legendary Pictures Present a Legendary Pictures Production, A Film By Adam Wingard, “Godzilla vs. Kong.” The film will be released nationwide in 2D and 3D in select theaters and IMAX on March 26, 2021 and will be available in the U.S. on HBO Max for 31 days from theatrical release. It is rated PG-13 for intense sequences of creature violence/destruction and brief language.