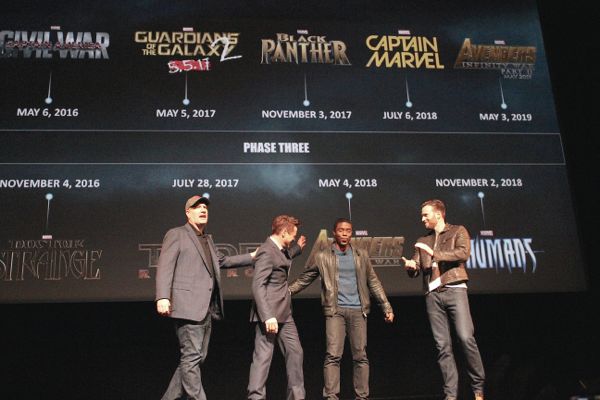 Cinemovie attended a special Marvel media event revealing an official timeline of films entering the Marvel universe within the next four years! In an Apple keynote styled presentation, head of Marvel, Kevin Feige, presented us with some landmark announcements that electrified the press and fans willing to wait in line to hear the news at El Capitan Theater in Hollywood, CA.

Kevin Feige opened up the festivities with this.

The biggest surprise was the announcement of Chadwick Boseman (Get On Up, 42) casting as the Black Panther who will be making his debut in the next Captain America: Civil War with Chris Evans and Robert Downey, Jr. Chris Evans (Captain America),  Robert Downey Jr. (Iron Man), and the newest addition to the Marvel family as the Black Panther were present at El Capitan. 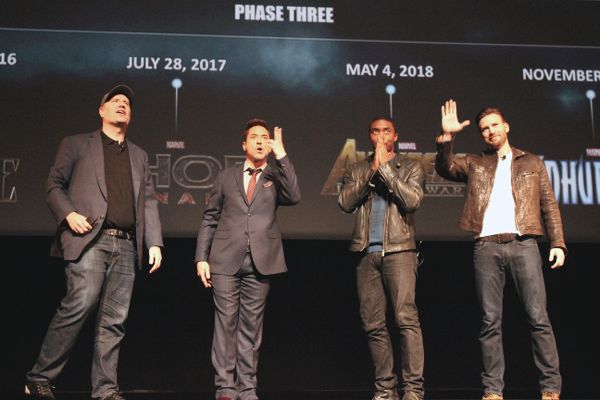 That was the only new actor introduced into the Marvel world. Doctor Strange now has a released date of November 4, 2016, but no actor was announced for the role. Other new franchises include Captain Marvel and Inhumans with question marks on the leads as well.

The other existing Marvel film’s release dates were also announced, and to keep it straight, here’s a lineup of sequels and brand new standalone films in the Marvel universe set to gross billions!

Paul Bettany On Avengers Sequel: 'I'm Not Allowed To Talk About That'