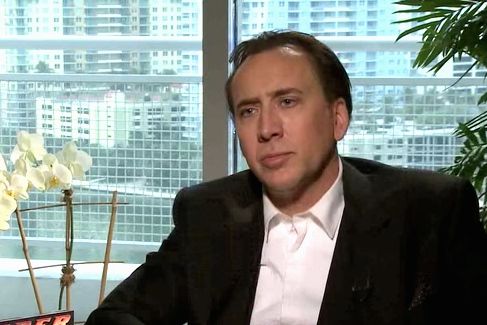 TWC-Dimension announced Wednesday that they have acquired the comedy, ARMY OF ONE directed by Larry Charles (Seinfeld, Borat, Bruno) and starring Nicolas Cage. Read all about the comedy which has Cage playing yet another quirky character.

Inspired by a GQ article based on the real-life exploits of Gary Faulkner, a Colorado man who set out to hunt down Osama bin Laden himself, Bob and Harvey Weinstein’s newly formed company TWC-Dimension acquired the comedy from Endgame and Condé Nast Entertainment. Larry Charles, the helmer behind "Seinfeld," Borat, Bruno and The Dictator seems to be the perfect director for the job given his past funny credits that feature fun and irreverent characters. Nicolas Cage is also the perfect choice to play the wacky guy who went to Afghanistan armed with a 40-inch sword, dagger, handcuffs and some hashish to track down bin Laden.

Read more about the new movie in the official press release from TWC-Dimension.

NEW YORK, NY – January 21, 2015 – TWC-Dimension today announced the acquisition of the North American rights of Condé Nast Entertainment and Endgame Entertainment’s ARMY OF ONE, a comedy directed by Larry Charles (BORAT, CURB YOUR ENTHUSIAM, BRUNO, SEINFELD) and starring Nicolas Cage.  ARMY OF ONE is inspired by a GQ article written by Chris Heath. The film is a loose retelling of the article, which tells the true story of Gary Faulkner. The semi-scripted project is written by Scott Rothman and Rajiv Joseph (DRAFT DAY). The film will be produced by Dawn Ostroff and Jeremy Steckler at CNÉ, Emile Gladstone at Emile Gladstone Productions and Endgame Entertainment’s James D. Stern. Julie Goldstein and Lucas Smith will be overseeing the project for Endgame. Patrick Newall will serve as executive producer. Principal photography is slated to begin in Q1 2015.

ARMY OF ONE will be released under the TWC-Dimension label, which has Bob and Harvey Weinstein working together on films with both artistic and commercial sensibilities. This past weekend’s family hit PADDINGTON was the first film to be released under this label.

“For many years I’ve been a fan of Larry Charles, from his work on SEINFELD, to BORAT, BRUNO and most recently THE DICTATOR.

I’m thrilled to be in business with him and look forward to working with him on this fascinating story. The plan for the movie would be an end of 2015 release,” said Bob Weinstein, co-chairman of The Weinstein Company.

“I'm delighted to be working with Bob and Harvey again and thrilled to be doing so with comic genius Larry Charles,” stated Stern.   “We’re thrilled to bring this fascinating story from GQ to the big screen with an all-star group of filmmakers, writers and performers,” said Dawn Ostroff, President of Condé Nast Entertainment  The deal was negotiated by TWC-Dimension COO and President, David Glasser, and by CAA and WME Global for the filmmakers and producers.

“We’re thrilled to bring this fascinating story from GQ to the big screen with an all-star group of filmmakers, writers and performers,” said Dawn Ostroff, President of Condé Nast Entertainment  .

The deal was negotiated by TWC-Dimension COO and President, David Glasser, and by CAA and WME Global for the filmmakers and producers.