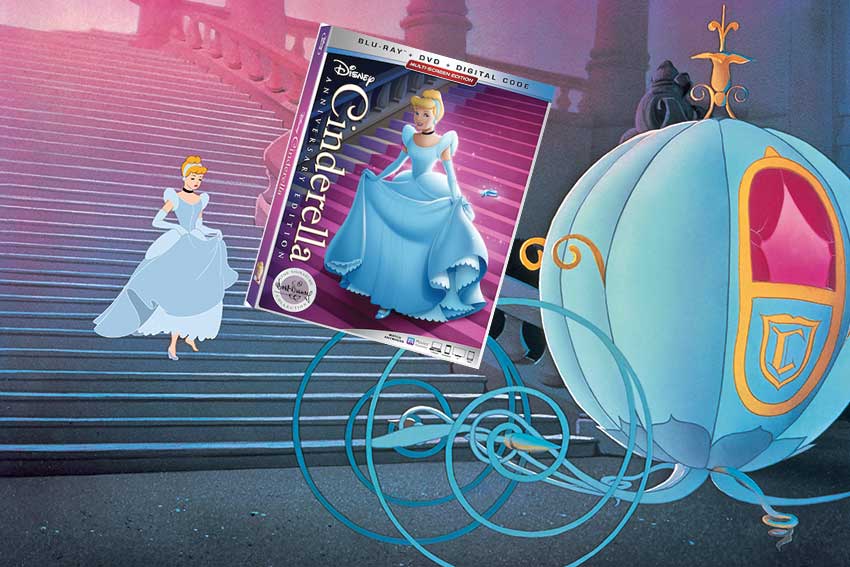 The Disney classic CINDERELLA arrives in the Walt Disney Signature Collection with an Anniversary Edition, and CineMovie has 5 CINDERELLA Blu-rays to giveaway. Enter below for your chance to win.

In honor of its upcoming 70th anniversary, the timeless animated classic CINDERELLA waltzes into the highly celebrated Walt Disney Signature Collection and the hearts of a whole new generation. The enchanting tale, which showed us that dreams really do come true — and inspired countless fans to reenact the Royal Ball and Cinderella’s infamous midnight dash — arrives home Digitally in HD and Movies Anywhere on June 18, and on Blu-ray™ and DVD on June 25.

CLICK BELOW TO ENTER FOR YOUR CHANCE TO WIN

PROMOTION DESCRIPTION: CINDERELLA Anniversary Edition Blu-ray Giveaway (“Sweepstakes”) begins on or about June 25, 2019 at 6:00 p.m. Eastern Time ("ET") and ends on July 2, 2019 at 11:59 p.m. ET (the “Sweepstakes Period”).  At the end of the Sweepstakes Period, a random drawing will be conducted to select winners from among all eligible entries received, as more fully set forth in the OFFICIAL RULES.  Entry in the Sweepstakes does not constitute entry into any other promotion, contest or sweepstakes.  By participating in the Sweepstakes, each entrant unconditionally accepts and agrees to comply with and abide by these Official Rules and the decisions of CineMovie TV, 2700 Arlington Ave. Ste. 101 Torrance, CA  90501 (“Sponsor”), which shall be final and binding in all respects.