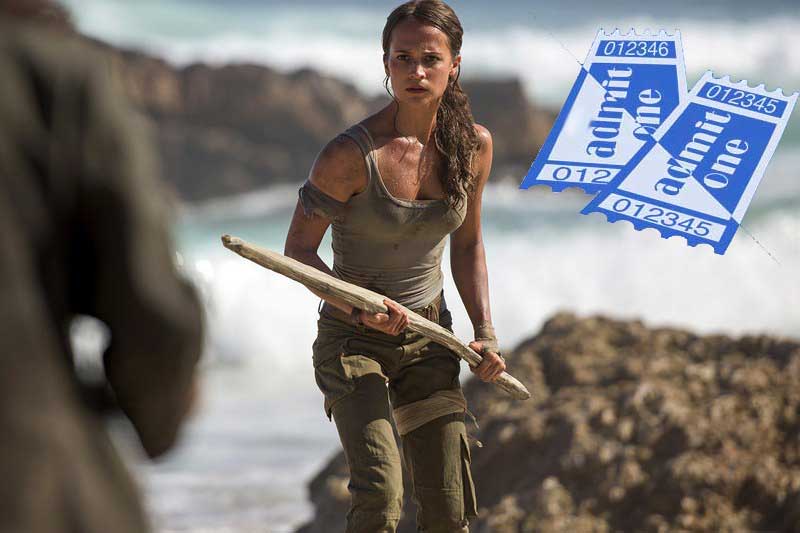 TOMB RAIDER starring Alicia Vikander hits theaters March 16, and CineMovie has your chance to get tickets to an advance screening in Los Angeles on Tuesday, March 13. At the screening, arrive dressed in TOMB RAIDER/Lara Croft cosplay for a chance at a grand prize and 5 random winners wll receive gift cards.

Lara Croft is the fiercely independent daughter of an eccentric adventurer who vanished when she was scarcely a teen. Now a young woman of 21 without any real focus or purpose, Lara navigates the chaotic streets of trendy East London as a bike courier, barely making the rent. Determined to forge her own path, she refuses to take the reins of her father’s global empire just as staunchly as she rejects the idea that he’s truly gone. Advised to face the facts and move forward after seven years without him, even Lara can’t understand what drives her to finally solve the puzzle of his mysterious death.

To enter TOMB RAIDER LA Ticket Giveaway, click on the form below.

PROMOTION DESCRIPTION: TOMB RAIDER LA Ticket Giveaway (“Sweepstakes”) begins on or about March 7, 2018 at 6:00 p.m. Eastern Time ("ET") and ends on March 12, 2018 at 11:59 p.m. ET (the “Sweepstakes Period”) or as long as tickets last.  At the end of the Sweepstakes Period, a random drawing will be conducted to select winners from among all eligible entries received, as more fully set forth in the OFFICIAL RULES.  Entry in the Sweepstakes does not constitute entry into any other promotion, contest or sweepstakes.  By participating in the Sweepstakes, each entrant unconditionally accepts and agrees to comply with and abide by these Official Rules and the decisions of CineMovie TV, 2700 Arlington Ave. Ste. 101 Torrance, CA  90501 (“Sponsor”), which shall be final and binding in all respects.