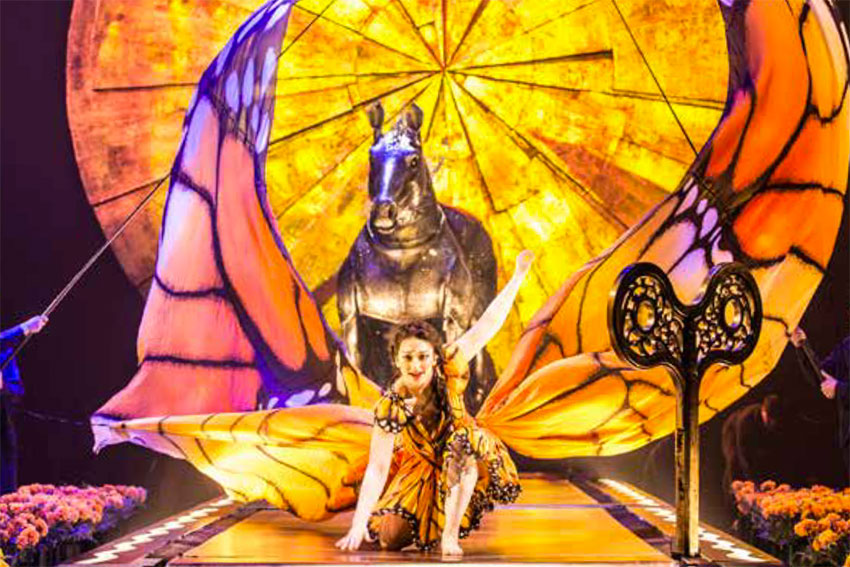 Cirque du Soleil's LUZIA is their most mesmerizing and dazzling show to date. Breathtaking acrobatic performances are usually the staple of the Cirque du Soleil shows, but the Mexican-inspired show adds water elements to the performers routine that makes audiences gasp in jaw-dropping acts. LUZIA is currently residing at Dodger Stadium in Los Angles under the newly redesigned white-and-gold Big Top in Los Angeles through February 11, 2018 before moving to Costa Mesa from February 21 – March 18, 2018. To find out how to get a discount on show tickets, read on.

Inspiried by the colors and sounds of Mexico, Cirque du Soleil brings LUZIA to SoCal! Experience water inside the big top with larger than life props in this unique production unlike any show you have ever seen before. A Cyr Wheel artist performs the unprecedented feat of rolling and spinning under the rain, while an aerialist suspended from a Trapeze flies and twirls through pouring showers. Hoop Diving is taken onto gigantic treadmills, expanding exponentially the speed and amount of daring leaps executed. Jaw-dropping highlights include a Guinness World Record holder juggling seven pins at breakneck speeds, a male contortionist skillfully twisting his body in the world’s most unimaginable positions, a powerful Aerial Straps specialist defying the laws of gravity at the center of a cenote (natural sinkhole), and two football (soccer) freestylers deftly mixing street dance with mind-blowing ball manipulations.

You'll leave LUZIA wanting to purchase the beautiful music of the Cirque du Soleil production. Unfortunately you can't take the beautiful visuals presente in LUZIA, but at least the music will remind you of the beauty that is LUZIA.

You can currently get 25% off on tickets to LUZIA. Buy your tickets at https://www.cirquedusoleil.com/usa/los-angeles/deals.

About LUZIA – A waking dream of Mexico
In a series of grand visual surprises and breathtaking acrobatic performances, LUZIA takes audiences on a surrealistic journey filled with wonder, playfulness and striking artistry. Smoothly passing from an old movie set to the ocean to a smoky dance hall or an arid desert, LUZIA cleverly brings to the stage multiple places, faces and sounds of Mexico taken from both tradition and modernity. Rich in awe-inspiring moments, LUZIA enchants by incorporating rain into acrobatic and artistic scenes – a first for a Cirque du Soleil touring production. With mesmerizing and refreshing performances, LUZIA brings traditional and contemporary circus disciplines to a whole new level.