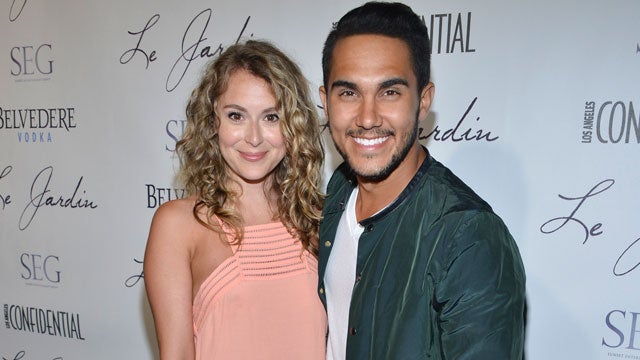 Alexa and Carlos PenaVega are expanding their own family as well as their television familia as the voice stars of Nickelodeon’s new series, “The Casagrandes,” a spin-off of the network’s popular series, “Loud House.” The married parents to two boys say it’s a blessing they are able to keep the family together by working alongside each other, and they plan on keeping it that way.

"The Casagrandes" tells the story of 11-year-old Ronnie Anne who moves to the city with her mom and older brother Bobby (Carlos PenaVega) to live with their big, loving family, the Casagrandes which includes Carlota voiced by Alexa PenaVega.

Alex Vega, 31, hit it big as SPY KIDS's Carmen Cortez, and now the mother of two young boys and wife to Carlos Peña, former "Big Time Rush" member and star of the Nickelodeon series by the same name, married in 2014, and combined their surnames to become the PenaVega's. As their married name suggests, the two are on the same page when it comes to their careers.

CineMovie spoke with the couple by telephone as they juggled the interview while taking care of their 2-month old newborn and two-year old son. The couple who moved to Hawaii to raise their expanding family, first told Nickelodeon the long distance would make them unavailable for the animated spin-off, but the network agreed to let them voice their characters close to home.

“They've made it work. We fly to Oahu to record once or twice a month and we take the whole family with us," says Carlos. "You know, we're kind of living the Casagrandes life. It's crazy.”

Nickelodeon's 'The Casagrandes' is Latino Version of Everybody Loves Raymond, Jokes Star

After taking on projects simultaneously early on, the stress of the separation made them realize that family comes first.

"And after that experience, we just said, you know what, no matter what happens, we're going to do what is best for the family and not, not for our careers," explains Carlos. "I'll tell you, we've worked more since making that decision to put our family first. And I think it's amazing."

Carlos and Alexa also star together in Hallmark's "Picture Perfect Mysteries" and the whole family is about to leave for Vancouver to shoot a sequel. The couple of course realize this time it will be more difficult with two little ones to watch over, but they're all for the adventure. Alexa, their family can enjoy the show together.

Now the busy parents can entertain their little ones with their new show, “The Casagrandes.”

“We have an almost three year old little boy and he'll be able to watch this show,“ says Alexa. “There's so much heart and what I love about 'Casagrandes' is they're really representing everybody. And it's just a really a heartfelt family show."

The SPY KIDS star hopes the Nickelodeon show will find common ground not just with Latinos but for everyone.

"We're loud. We're all centered around food," says Alexa. "We're saying the cliche things that Latinos say, but that is still a part of our culture. However, we, I think in the industry it's expanding so much where we're no longer going to look at television shows and movies as, Oh my gosh, look at this is a television show about a Latino family. It's just going to be, Hey, this is a show about a real family experiencing real life. And that's what's exciting. It's no longer going to be let's talk about all of the differences that we have, but more about just showing, you know, how we are all the same."

She adds everyone can relate to the idea of family.

"It's definitely a show about family for sure," Alexa states. "But I think what I love about it, is you're going to get a big kind of cultural experience. The show is loud. It's exciting. It's a family that have a lot of differences. Every characters is totally their own person and the characters are not alike in any way. However, at the end of every episode, whether they agree with each other, whether they've been fighting the whole time, at the end of the episode, it's just about love and supporting one another and they all come together. It’s such an awesome way. And for me, in my own family, I feel like that is totally accurate. You know, we can all be fighting and crazy and loud, but at the end of the day, we're family and we love each other and we still hold all of those values. So as a parent, I'm excited for kids to see this show because through all of our differences, they're still love at the end of the day.”