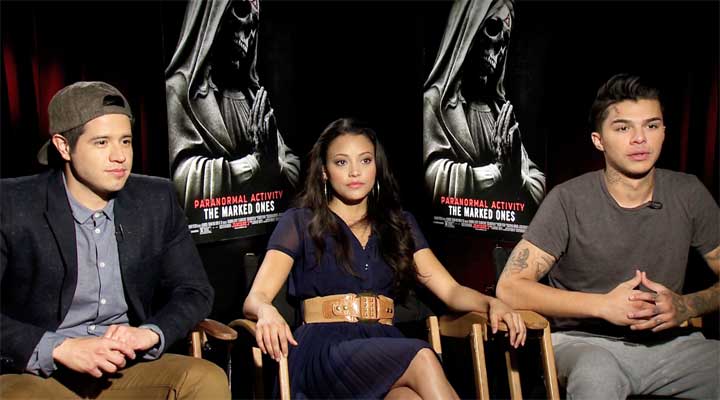 Actors Jorge Diaz, Gabrielle Walsh, Andrew Jacobs sit down with CineMovie to talk about joining the Parananormal Activity movie franchise and the reaction to the film on Twitter with its controversial ending.

The fourth installment of the highly successful horror franchise centers on new characters living in the barrio and black magic. PARANORMAL ACTIVITY: THE MARKED ONES has already earned over $40 million for a film reportedly made for $5 million.

As usual, unknown actors head the cast of unsuspecting victims of an evil spirit. Newcomers Jorge Diaz (East La High, Filly Brown), Gabrielle Walsh and Andrew Jacobs got the chance of a lifetime starring in an internationally famous franchise. In the found footage format, Jesse (Jacobs) experiences some paranormal activities within his own body after his neighbor dies a mysterious death. As he investigates with his friends Hector (Diaz) and Marisol (Walsh), things only get worse.

As the first film release for 2014, PARANORMAL ACTIVITY: THE MARKED ONES caused quite a fan reaction on Twitter when it opened January 2nd. The reactions ranged from loving the movie, calling it the best in the series, but others were angry with the finale.  Jorge Diaz and Gabrielle Walsh couldn't resist going online to check the reactions from fans, but Andrew Jacobs resisted the temptation.