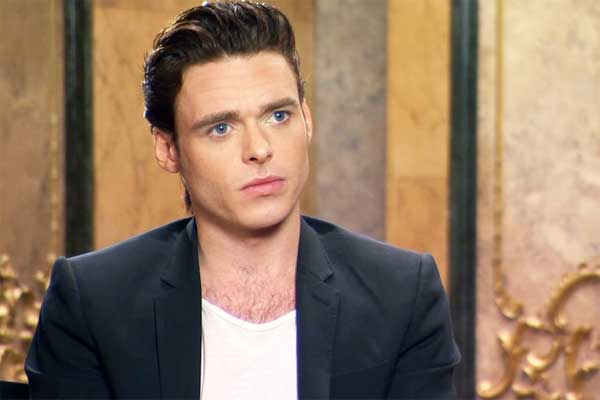 Richard Madden's Robb Stark may be dead, but he's got the inside track on "Game of Thrones'" Season 5, and he opens up about his fear of transitioning to a Hollywood movie playing yet another prince.

At a recent press event for Disney's live action reboot of CINDERELLA, the former star of HBO's "Game of Thrones" said he misses his friends on the set as well as being on the show, and although he may be dead, he's still has the insight into season 5. While talking about his new role as Prince Charming in Kenneth Branaugh's CINDERELLA, Madden joked it was nice not having to deal with violent deaths of family members. "All the good guys get killed. Wait 'til Season 5. I know some secrets." Madden also added that "Game of Thrones" fans often confuse him with his on-screen brother Jon Snow (Kit Harrington), and constantly ask him to sign his picture.

The CINDERELLA star had reservations about going from an X-Rated fantasy world to a G-rated fairy tale and possibly cheesy remake of Cinderella. In the interview, he explains how he got the script and why he doubted it was a good move for his first role in a huge Hollywood production.

On set, Madden bonded with "Downton Abbey's" Lily James who plays Cinderella since she, too, was starring in her first movie project coming off a hit t.v. show. They were so comfortable with each other that James often burped in his face. It wasn't on purpose, according to her co-star Madden, but blamed the corset she wore under the blue gown. James ate too much and the corset didn't allow the contents to digest properly. Of course his version of the events are much funnier. Listen to the interview.