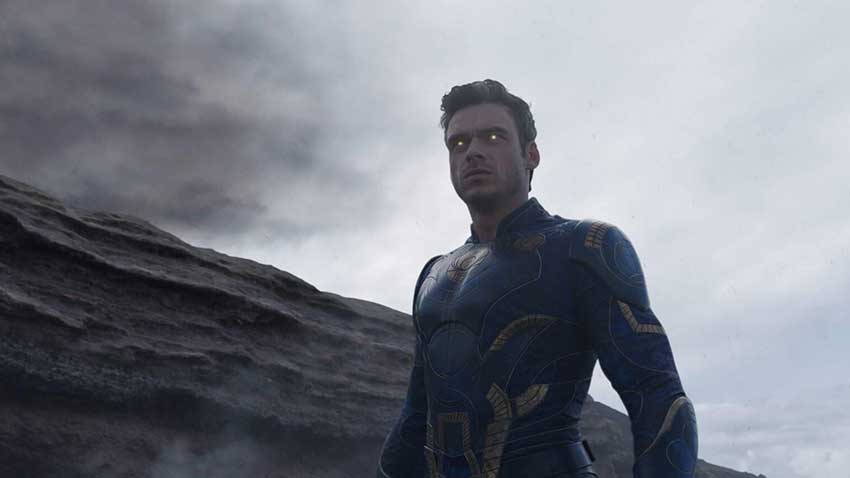 ETERNALS is the kind of movie you’d expect from indie director Chloé Zhao. The writer/director brings a different sensibility to the MCU movie making it Marvel Studio’s most esoteric and adult entry.

The Eternals are a group of heroes sent to Earth by the Celestials to protect primitive humans from creatures called the Deviants. Once they defeat the monsters, the heroes separate and blend in throughout the centuries shaping and influencing the progression of humans without interfering in their destructive nature.

These superheroes grapple with not being able to stop man from destroying itself and whether humanity is worth saving. These themes are present throughout the script by Chloé Zhao & Patrick Burleigh and Ryan Firpo & Kaz Firpo.

While the action is top-notch and entertaining, ETERNALS suffers from too much exposition. Zhao obviously didn’t want to make just another superhero flick and brings much deeper substance to the genre with meaningful themes about the fate of humanity and the universe. However, the exposition is often repetitive and covers similar issues when another Eternal is re-introduced as the group assembles to once again destroy the Deviants.

Clearly, Zhao wanted each Eternal to have a character arc which is admirable but it often bogs down the movie and stalls when dealing with another character’s issue.

Some of the questions posed by ETERNALS is very deep and meaningful. Brian Tyree Henry’s Phastos is disillusioned with humanity over its need to destroy each other. As an inventor of the group, his character grapples with the guilt of having helped in the creation of the atomic bomb. Or Druig (Barry Keoghan) whose power is controlling minds, is annoyed he can’t simply control humans and stop wars.

Zhao ponders some meaningful issues in the ETERNALS, but it often feels like the themes are hitting you over the head. A large chunk of Act 2 is rather dull and repetitive. MCU films often deal with these sorts of themes but in a more subversive way.

In the MCU timeline, ETERNALS takes place post blip but the film starts from the very beginning when the Eternals arrive on Earth and their early years living among the humans. Then the film fast-forwards to the present day but Zhao often flashbacks to an earlier time which is often jarring and takes the viewer out of the moment.

While there’s no shortage of good action sequences, Act 3 is when the party really gets going when tension among the Eternals makes it the most compelling part of the MCU film. The Eternals’ powers are unique to the MCU and thus watching the superheroes in action is quite exciting.

Richard Madden’s Ikaris is by far the coolest Eternal with his Superman abilities to fly and shoot lasers out of his eyes. Gemma Chan’s Sersi is the heart of the movie in her quest to save the human race. Angelina Jolie takes a back seat as a supporting character yet effective warrior as Thena. Every actor leaves an impression.

ETERNALS is the most mature MCU film with themes that children may not understand but it’s got plenty of action to entertain the tiny humans. ETERNALS could have easily been a tighter film with much less exposition but it’s clear the director didn’t want to sacrifice character development which is admirable.

As with most superhero flicks, stick around for the end credits when two huge surprises will inform you of the direction the MCU is headed. The word is out about one of the spoilers thanks to a reporter at a Hollywood trade publication spilling the beans on Twitter.

The Eternals costumes are breathtaking from the design and the way color bounces off them. Costume Designer Sammy Sheldon has worked on prior Marvel films but the wardrobe really standouts out.

When Kevin Feige said to expect a different kind of MCU movie, he meant it. ETERNALS is a Chloé Zhao production with beautiful imagery and meaningful themes behind a superhero film that leaves you pondering the same questions about whether we as a race are worth saving.