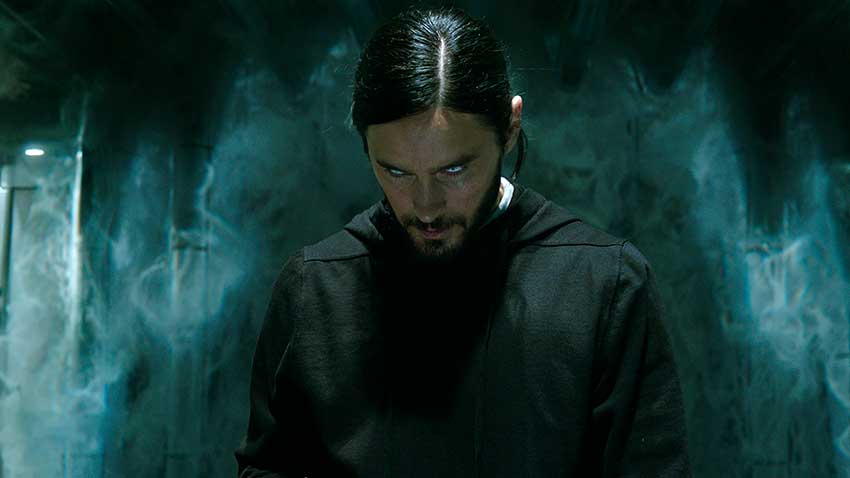 If you’re going into MORBIUS for a comic book adaptation, you’ll be disappointed. MORBIUS plays like just another vampire movie rather than an origins Marvel story. With a predictable plot, inconsistent beats, flat dialogue and lingering characters with no purpose, MORBIUS is a huge letdown. The end credits feel like an afterthought that leaves you questioning your own sanity.

Suffering from a rare blood disorder, Dr. Michael Morbius is determined to discover a cure to save others like himself. He gambles on a theory that turns him into a blood-sucking monster.

The screenplay by Matt Sazama and Burk Sharpless is a generic vampire story. Man becomes infected by a bat that turns him into a vampire but he must resist the monstrous urges to kill to feed. Created for the comics by Roy Thomas and Gil Kane, it’s hard to believe the filmmakers were unable to create something a little more original rather than just take the story beats from the comics. There’s zero creativity in the cinematic introduction of Marvel’s anti-hero.

First off, the cast is so bland you really don’t have anyone to root for. Leto doesn’t really bring much to the table given the unoriginal story. The rock star vampire look is sexy at least. Arjona’s Dr. Martine Bancroft does stand out as the challenger to Morbius’ choices. Matt Smith, as usual, delivers his wicked sense of humor as the cocky best friend but you can easily predict where that relationship is going.

However, the rest of the cast is wasted. Jared Harris’ Dr. Emil Nikols is likable enough but he has a few scenes. Tyrese Gibson is a walking corpse with zero personality as one of the detectives on the case. Al Madrigal, as his partner, provides some comic relief, but these detectives pop in and out of scenes with no real purpose. There’s no cat and mouse game between the detectives and Morbius. I have a feeling those scenes were left on the cutting room floor.

The CGI for the vampire transformation is impressive, and terrifying to look at. There was no prosthetic make-up, according to Adria, so the transformations do look authentic. However the flying scenes not so much. The CGI there looks like a graphic in a video game, hence not as believable.

There are so many inconsistencies throughout the movie. The top-secret lab is a few steps away from Morbius’ patient hospital rooms. Why would an unsanctioned science lab not be isolated far from any prying eyes? It seems also that anyone can walk into this top-secret lair and steal the magic potion.

The post-credit scenes promoting a future team-up are sloppy and confusing. The introduction of a familiar character throws you off and you have to process and rationalize what you just saw on screen. There is no setup or hint as to where this story exists within the Marvel universe prior to these end credits so it’s all confusing.

Coming off the success of SPIDER-MAN: NO WAY HOME, MORBIUS is a hard pill to swallow. Sony Pictures has not learned from Kevin Feige and Marvel Studios how to create a throughline among their Marvel properties.

MORBIUS plays like a vampire movie, and there are those who may enjoy that storyline but comic book fans will leave the theater feeling unsatisfied.