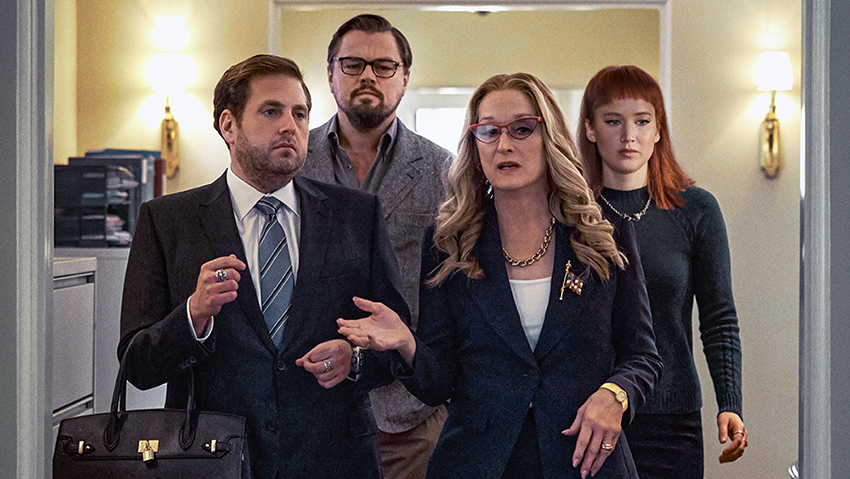 High-profile films are hitting movie theaters and streaming platforms, so here is the scoop on what to watch or avoid.

DiCaprio and Lawrence play astronomers who discover a large meteorite heading to Earth that will destroy the planet. They alert the U.S. President played by Meryl Streep who plays the commander-in-chief as a female version of Trump. Instead of heeding their warning, she makes it a political issue and many Americans deny the impending doom is real. Sound familiar?

Cate Blanchett portrays a FOX News-type anchor in a cartoonish manner, and sometimes on point, as does the rest of the cast except for Jennifer Lawrence's hippie-type scientist who's the most realistic character. Jonah Hill plays his usual shtick as an annoying brat while his buddy Leonardo is the nerdiest we've ever seen him.

In a nutshell, DON'T LOOK UP is rather entertaining and hilarious at times but the satire wears out its welcome with a one-note joke that's stretched out for a two-and-a-half-hour run time. The absurdist comedy is coming to Netflix on December 24 so save your money and wait.

(In Theaters Only)
Steven Spielberg has dreamed of making WEST SIDE STORY since he was a child. The only reason to remake this classic Broadway show for another cinematic incarnation was to correctly cast Latinos in the Puerto Rican roles. While there are some slight updates thematically, WEST SIDE STORY stays true to the original play.

The scene-stealers are Rita Moreno as a new character, Mike Faist as Riff and Ariana DeBose's performance as Anita is outstanding.

While the production value and musical numbers are quite impressive and poetic, WEST SIDE STORY doesn't bring the wow factor required to justify a remaking of this classic story.

Musical fans will no doubt turn out for WEST SIDE STORY but if they're banking on the Latino audience to come in droves, sadly Latinos don't frequent this genre. That lesson was learned with IN THE HEIGHTS this past summer.

(Prime Video)
Riz Ahmed stars in this sleeper hit, now streaming on Prime Video. The trailer leads you to believe you're seeing one kind of movie, but the brilliant bait and switch draws you in to the story.

That’s all I can say as to not ruin the experience of watching Riz Ahmed’s performance and that unexpected twist.

THE POWER OF THE DOG

Jane Champion's THE POWER OF THE DOG is one of those movies that's not for everyone given that it requires reading into the character's actions. Benedict Cumberbatch, Kodi Smit-McPhee and Kirsten Dunst deliver powerful performances not so much in dialogue form but with their physicality.

Based on Thomas Savage's 1967 novel by the same name, THE POWER OF THE DOG is one of those movies you have to pay close attention to because Champion doesn't make clear the character's motivations until Act 3.

The Western drama is set in Montana circa 1925. Cumberbatch is the volatile rancher Phil Burbank who torments his brother's (Jesse Plemons) new bride, Rose (Dunst), and her awkward son (Smit-McPhee) because he believes she's a gold-digger.

Phil doesn't verbally attack Rose but he torments her in other ways. Rose is not emotionally stable so it affects her greatly.

It's not until later in the story when you start piecing the character's backstory together to get a broader sense of why certain characters act the way they do. Champion reveals these truths about the characters in very subtle ways.

The ending is certainly a water cooler moment that will inspire conversations around it.

The Western drama is beautifully shot with mostly barren landscapes that immerse you in that time period.

THE POWER OF THE DOG is worth watching on the big screen for its breathtaking visuals which may be lost watching it on Netflix.