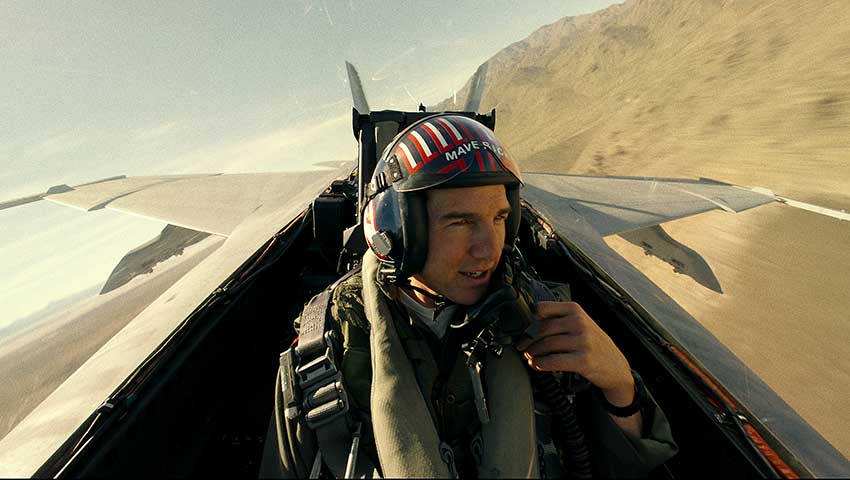 If you felt the need for speed in 1986 after watching TOP GUN, MAVERICK will make you feel the need for G's. Tom Cruise and the TOP GUN: MAVERICK filmmakers do justice to the original and even improve on the action and emotions.

After 30 years of service, Pete "Maverick"' Mitchell is hanging to his career by a thread. The armed forces pilot has tapped out as a captain and test pilot. Maverick is still shrugging off authority. His only way to stay in the armed forces is to train a new group of top of their class pilots for a dangerous mission. Aside from Cruise, Val Kilmer is the other original cast member to return. The new cast includes Jon Hamm, Jennifer Connelly, Miles Teller, Monica Barbaro, Jay Ellis (Insecure), Glenn Powell, Danny Ramirez and Lewis Pullman.

Jon Hamm On Working with Tom Cruise: 'It Was One of the Best Experiences of My Life'

Maverick isn’t the same person from 30 years ago. He's still confident in his flying skills, just not as cocky. In the 1986 film, he lived in the shadow of his father. In TOP GUN MAVERICK, he’s a legend but a pariah at the same time in the Armed Forces. He is still haunted by the death of his best friend, Goose. Maverick often invokes the name of his buddy while in the air which adds to the sentiment and nostalgia. Cruise brings back a mature Maverick but he still retains some of those qualities that made him a loose cannon in the first movie without the attitude. We see real growth in the character over 30 years. Maverick is much more vulnerable to love and when it comes to Goose’s son Rooster played by Miles Teller.

Miles Teller brings the same qualities as Anthony Edwards’ Goose. Like father like son, Rooster dresses in Hawaiian shirts, sports a mustache and can play a mean rendition of "Great Balls of Fire" on the piano. Miles plays it just right as the confident pilot with vulnerabilities. The job of the cocky pilot like Val Kilmer's Iceman goes to Glenn Powell‘s Hangman. Powell fits the bill and plays the part well.

The other cast members stand out as different personalities especially Monica Barbero as a levelheaded top of her class pilot. Connolly is also a nice addition as Maverick‘s love interest but she makes him work for that honor and Maverick is willing to go at it.

The flying scenes are just out of this world. The dog fights are 100% more intense than the original. You can't fake the G's on the actors' faces so it brings a level of authenticity never seen before in a motion picture. Kudos to the actors for putting themselves through the rigorous training and being brave enough to fly in those fighter jets, sometimes throwing up for their craft.

The screenplay by Ehren Krueger, Eric Warren Singer and Christopher McQuarrie doesn’t get too complicated in its mission. It’s very straightforward with interesting characters especially the relationship between Maverick and Rooster.

The one complaint about the sequel is the finale which takes a certain moment at the end of the first movie and repeats it in MAVERICK. For some, it will evoke a nostalgic feeling but others may see it as a straight-up copycat. Regardless the emotion is there and it's satisfying.

The original score remains unchanged in TOP GUN: MAVERICK so when you hear the iconic sound, your arms fill up with goosebumps. Luckily they didn't upgrade the sound to a more modern take.

TOP GUN: MAVERICK is in theaters on May 27.