I’m not even going to bother describing the plot because it doesn’t deserve my time so watch the trailer below, but here is what you ought to know about what’s wrong with CHIPS.

There’s not much to live up to given the CHiPS show is the typical cheesy action television from the 70s, so it shouldn’t have been hard to top. This could’ve been a FAST AND FURIOUS franchise with the California Highway Patrol, but instead if offers unexciting car and bike chases with stunts right out of an 80s movie. There’s a ridiculous fight scene that is totally unnecessary, and a waste of time.  I will say the only climactic action scene comes at the end, and there are funny bits, but it comes too late to make up for the buffoonery in the prior scenes.

It’s evident that Warner Bros. let Dax Shepard, who only has one other directorial effort under his belt, run loose with an action movie with a low-budget cost. That’s evident with a script that feels like a first draft with jokes that run on too long, lame gags, awkward moments with Shepard promoting homophobic panic, tasteless shots of naked women, a weak plot befitting a 70s television show and countless inconsistencies. The physical comedy is awkward, unfunny and Shepard and Peña area a mismatch who never develop a bromance on screen. Their characters are buffoons, and have no redeeming qualities. Where is the Shepard from the Samsung commercials? That’s a likable guy, but here Kristen Bell’s husband tries to hard to be sympathetic and just comes off as an idiot. And why is he so obsessed with his crotch? Vincent D’Onofrio, who is a great actor, is a waste as a cartoonish villain.

In a sit down with Peña, the actor who goes undercover as Ponch in CHIPS, says once Warner Bros. greenlit the script, Shepard went back and changed a few things and added funny bits that Peña contributed to. The goal was to push the envelope in the CHIPS reboot. However, Shepard’s idea of pushing the envelope is reducing women to purely sexual objects, and locker room talk that should stay in the men’s locker room. At one point, Ponch and Jon are discussing a new dating trend which involves eating out someone’s ass. Gross! There are some other uncomfortable moments in the film which will make men laugh and women cringe. 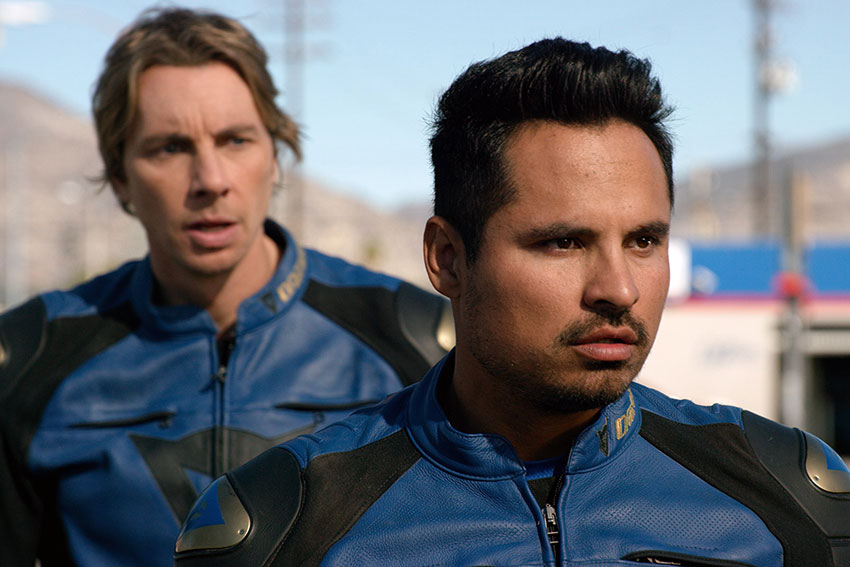 To be fair, I was in the minority among my female colleagues who surprisingly enjoyed the film minus a few crude jokes here and there. As a huge fan of the original show, I went in with very low expectations and an open mind since the trailer didn’t give me much hope, but CHIPS the movie was so lame it was painful. Why even bother calling it CHiPS since fans of the show will disavow this namesake.

The very talented Peña is wasted here, and we know he’s got comedy chops as evident in his very enjoyable role in Marvel’s ANT-MAN.

To succeed with a movie adaptation of a television show, you have to reinvent it like 21 JUMP STREET and THE BRADY BUNCH did with clever dialogue  that pokes fun at the original concept. CHIPS does none of that, and there were many missed opportunities.

HAVE YOU WATCHED CHIPS? WHAT DID YOU THINK?